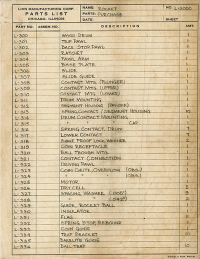 Being on the Collections team at The Strong museum means that there’s never a dull moment. We are continually receiving boxes and boxes (and sometimes pallets) of toy, game, doll, and electronic game-related objects, as well as related ephemera and papers. A unique artifact being cataloged will catch the eye of a colleague, and a discussion of its significance (or a fond trip down memory lane) will ensue. Occasionally, a large collection may take quite some time to fully catalog on the museum side or process in the archives. That was the case for me in 2018; whenever anyone stopped by my office and asked, “So, what are you working on now?” my reply was always: “Pinball.”

In late 2017, the museum acquired a large collection of primary source documentation on pinball from an industry insider. For nearly six months, I processed this collection, making it fully accessible to researchers and pinball enthusiasts. This meant not only arranging and describing the collection in an ideal manner, but also performing those preservation tasks that (most) archivists love: removing fasteners (like staples, paper clips, and yes, straight pins) and adhesives, sleeving fragile artwork and photographs, and gently flattening drawings that had been rolled for decades. The final result, the Bally-Midway-Williams records, contains documentation from the Bally, Midway, and Williams pinball companies, with the bulk of the materials dated between 1947 and 1993. But pinball history in America dates back even further than that.

Raymond Moloney founded the Chicago-based Bally Manufacturing Company in 1932 to make pinball games. Along with pinball, Bally fabricated mechanical slot machines and gambling devices. (During World War II, Bally halted production of recreational items and instead made ammunition and airplane parts.) The addition of flippers and bumpers transformed pinball from a gambling machine to a skill game. In 1969, Bally purchased Midway Manufacturing Co., another amusements manufacturer (previously established by Henry Ross and Marcine “Iggy” Wolverton). Midway operated under its own name for another decade, until Bally merged its own pinball division with Midway’s to form Bally/Midway Manufacturing in 1982.

Meanwhile, in 1943, Harry E. Williams founded Williams Manufacturing Company, also in Chicago, Illinois—the American center for pinball production. His company rose to prominence as one of the most important arcade and pinball game manufacturers in the United States after World War II. Williams pinball designers introduced many pinball innovations, including ramps, scoring reels, drop targets, and modern three-inch flippers. The company was acquired and incorporated several times, resulting in company name changes (becoming Williams Electronics, Inc. in 1974 and then WMS Industries in 1987). In 1988, WMS purchased competitor Bally/Midway. The pinball division of WMS closed in 1999, after more than 50 years of designing and manufacturing electro-mechanical and solid-state pinball machines. As of 2019, WMS is retained as a brand of Scientific Games.

If you’re truly interested in pinball history research, this collection is a must-see. (We also house several other pinball-related archival collections, including the Williams pinball playfield design collection, the Steve Kordek coin-op and amusements collection, and the Atari Coin-Op Division corporate records.) But if your enjoyment of pinball instead lies in playing rather than poring over documents, then you definitely should visit the Pinball Playfields exhibit here at The Strong. Pinball was just inducted into the The Strong’s National Toy Hall of Fame in 2018, and it is experiencing a resurgence in popularity around the world. Working on this collection and seeing firsthand the playfield drawings and development notes about some of my favorite pinball games (including Monster Bash and Addams Family Pinball) was incredibly fascinating, and you’ll surely feel the same!

For more on toys, games, and all sorts of other stuff for play—past and present—from Julia and her museum colleagues, visit The Strong’s Play Stuff Blog