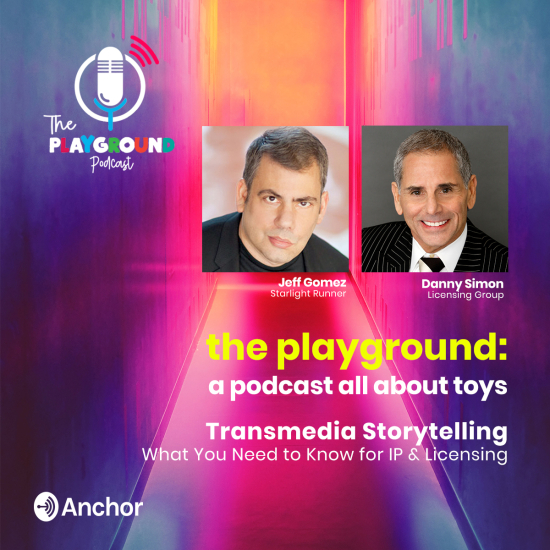 Jeff Gomez is President and CEO of Starlight Runner Entertainment, a leading producer of highly successful fictional “Worlds,” which maximize the value of intellectual properties by preparing them for licensing, merchandising and extension across multiple media platforms.

Starlight Runner then utilizes a variety of technologies … to produce these “Worlds,” directly extending them onto the Internet and mobile phone platforms, as well as into animated and live-action feature films, branded and sponsored digital content, video games, books and graphic novels, toys and merchandise. ..The company’s clients include The Walt Disney Company, Comcast, Mattel, Hasbro, and Scholastic.

Danny Simon’s Linked In bio describes him as:

…A recognized expert in domestic and international licensing…Danny headed up the licensing departments at Lorimar Studios, 20th Century Fox, and Carolco Pictures and since 1992, Danny has operated his own independent licensing agency, The Licensing Group Ltd (TLG). The company specializes in the licensing representation of entertainment, lifestyle and corporate properties on a global basis. In addition, TLG represents a number of manufacturers, assisting these companies with the selection and negotiation of various intellectual properties for use in developing additional products.

Danny is a licensing consultant with clients in both the United States and internationally, and has consulted to the Hong Kong Trade Development Council, and Bollywood’s premier film studio, Yash Raj Films among others. Hs.

Danny is with Gregory Battersby, the author of the best selling The Basics of Licensing.