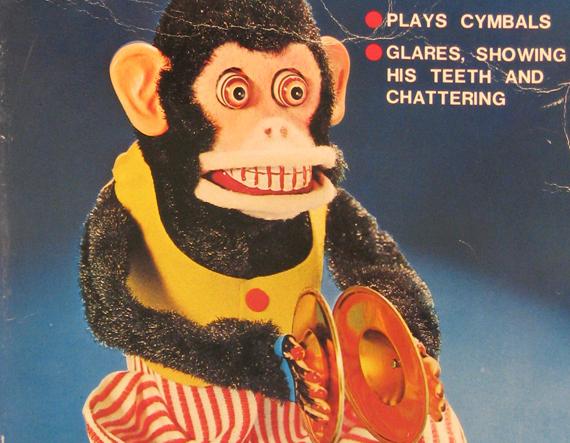 Autumn is upon us, replete with all things paranormal and pumpkin spice. Hollywood once again offers us an opportunity to be terrified for the cost of a movie ticket and large popcorn. Annabelle (2014) isn’t the first “playful” villain that has captured our collective attention: for a half a century, scary toys have come alive in books, on television, and on the big screen.

A 1963 episode of The Twilight Zone featured Telly Savalas and a doll that looked and sounded eerily like the popular Chatty Cathy. The dolls sound alike for a reason: June Foray, the original Chatty Cathy voice, recorded Talky Tina’s lines for the episode. In “The Living Doll,” Savalas’ ill-tempered character is livid when his wife buys his stepdaughter a Talky Tina doll. When his wife and step-daughter are out of earshot, Talky Tina expresses her displeasure: “My name is Talky Tina, and I am going to kill you.” Twilight Zone host Rod Serling gives the audience this “reassuring” epilogue: “Of course, we all know that dolls can’t really talk, and they certainly can’t commit murder. But to a child caught in the middle of turmoil and conflict, a doll can become many things: friend, defender, guardian…”

In 1975, the ABC Movie of the Week featured Trilogy of Terror, starring Karen Black. In “Amelia,” one part of the trilogy, a meek woman buys a Zuni hunting doll for her anthropologist boyfriend’s birthday. Amelia’s domineering mother harangues her for breaking their long-standing Friday night date to meet with her boyfriend instead. After the confrontation, the gold necklace that keeps the Zuni warrior spirit trapped inside breaks off of the doll. Despite a valiant struggle, Amelia succumbs to possession. In the final scene, we see her lying in wait for her mother, teeth bared and knife at the ready. “The monkey glimmered up at him from his older son’s hands, grinning its old familiar grin. The same grin that had haunted his nightmares as a kid, haunted them until he had—”

Before it was the screeching watchman in Toy Story 3 (2010), the cymbal-banging monkey was the nightmare-inducing antagonist in Stephen King’s 1980 short story, “The Monkey.” Hal Shelburn returns home after his aunt’s death to discover that the toy monkey that haunted his childhood has returned, determined to bring death to Hal’s loved ones. With each crash of its cymbals, another victim meets a grisly end.

Don Mancini’s Child’s Play (1988) launched the “Chucky” cinematic empire, which spawned four sequels over 16 years. It appears Mancini had multiple inspirations for Chucky: the “Trilogy of Terror,” the My Buddy doll, and a real haunted doll named Robert. “The movie changed my life,” Mancini said of the trilogy.” Chucky’s physical similarities to My Buddy, who hit toy store shelves in 1985, are unmistakable—and “Bloody Buddy” was a working title of the original script for a time. The serial killer character Charles Lee Ray’s possession of the Good Guy doll was achieved through Voodoo magic, as was the possession of Robert the Haunted Doll. This season’s box office hit, Annabelle (2014), is also based on the story of an actual haunting. The real Annabelle is an oversized Raggedy Ann doll. According to Lorraine and Ed Warren, experts on spirits and demonology whose famous cases are portrayed in The Amityville Horror (1979, 2005) and The Conjuring (2013), a woman purchased Annabelle from an antique shop as a gift for her daughter. The daughter soon reported paranormal activity. On the big screen, Annabelle is a porcelain doll, which might make her more sinister: recently, a woman in Orange County, California, was embarrassed to find that her anonymous gift of porcelain dolls to neighborhood children was seen as “creepy.”

We continue to be fascinated by the possibility of evil dolls and toys—the picture of innocence—masking a dark soul. If reading the stories and watching the movies aren’t enough to quench your thirst for the macabre, you can plan a road trip to visit Annabelle yourself at the Warren Occult Museum in Connecticut, and then swing south to Florida and see Robert the Haunted Doll at the Fort East Martello Museum. If you are more of a homebody, you can buy your own haunted doll online or “adopt a spirited doll,” if you will, and have a paranormal experience in the comfort of your own home. But be warned: you might find yourself sleeping with the lights on, with one eye glued to your new companion!