One of the best aspects of working at The Strong is the endless opportunity for nostalgia. Last year, I wrote about my family’s tradition of treating Black Friday shopping like a game. Shortly after writing that post, I was reminded of another cherished holiday tradition when staff at the Brian Sutton-Smith Library and Archives of Play included a post about the J. C. Penney holiday catalog on their Tumblr page. Throughout my childhood, the J. C. Penney Big Book was parked on the coffee table in the living room from the beginning of November through the middle of December. During those weeks, it was common to see family members flipping through the pages, a pen poised at the ready to circle anything that might catch the eye. As children, my mother led us to believe that by performing this ritual we were providing “hints” for Santa Claus, who apparently was the culprit when the giant catalog went missing in the days before Christmas. 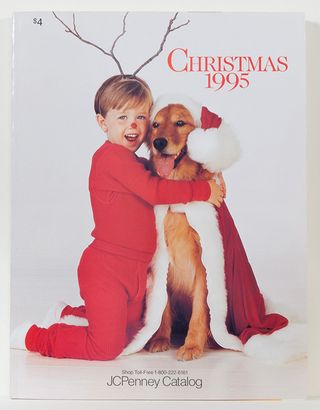 This story, combined with the influence of A Miracle on 34th Street, led me to the only logical conclusion: Santa Claus worked at J. C. Penney. The store was obviously his workshop and the catalog was a magical gift directly from the hands of St. Nick himself. I therefore felt it my duty and privilege to convey my Christmas wishes through his preferred method and not be one of those deviant children who wrote a letter and asked for things that might not even be available from the “workshop.” Who needed a letter when the catalog had everything that a child could possibly wish for? Granted, images of boring adult stuff like bedspreads and blenders filled most of the volume, but Santa thoughtfully included a table of contents and color-coded the pages so I could quickly find the good things. Had my mother kept these catalogs, they would serve as a chronology of my childhood interests from dolls and Barbie’s Dream House, to the electronic keyboard that I used once, to the art supply kit that ultimately launched my interest in art and museum work.

Unlike Black Friday, which remains a yearly obsession, my family members and I slowly forgot about the tradition of the giant holiday catalog. As I grew older, I migrated from the toy section of the book to electronics and sports equipment. Eventually, steered by a combination of general teenaged ambivalence and the advent of the internet age, my interest faded completely and the catalog no longer appeared on the coffee table every November. I was surprised to find that J. C. Penney had continued to issue Big Books until 2009. It seemed to me that it should not have taken that long for the company to realize that the internet had happened and that kids now simply compile a digital wishlist to email to potential gift givers. I might be wrong about that, however. Early this year, J. C. Penney announced that it would be resurrecting its catalog department, having found that many people peruse catalogs and then head to the computer to place their orders. For now, the catalogs only feature items from the “home” department (the boring adult stuff), but I for one would like to see the resurrection of the Big Book. After all, how else will Santa let us know what is available this year?