Rubber has been used to play ball since the first Mesoamerican ball games of the Olmec people began around 3,000 years ago. The ball courts used for that game can be visited at Tulum, Ek Balam, and Coba in Mexico. The Olmec discovered that latex from a rubber tree could be mixed with juice from a species of morning glory to produce a useable rubber. The rubber was formed into hollow and solid balls for the ancient game, but very few examples have been recovered from archaeological sites in Mexico and Guatemala. 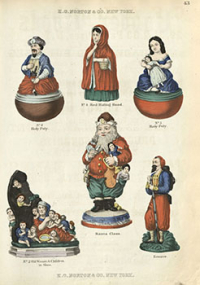 In 1770, Joseph Priestley noted that the sticky, gummy material was good for rubbing off pencil marks on paper, and the name “rubber” was coined for what we would now call a rubber eraser. In 1844, Charles Goodyear patented the chemical process of vulcanizing rubber to create a moldable, pliable, waterproof material. The trade catalog of H. G. Norton and Company from 1869 shows rubber being used for a variety of housewares, dolls, balls, and toys. Rubber’s capacity to be tinted, molded, or coated with paint appears in the images of a variety of toys with textured surfaces, colorful stripes, and even comic scenes. Rubber was cast around weighted bases to make roly-poly dolls. It was formed into Santa Claus, the old woman who lived in a shoe, and Zouave Civil War soldier figures. 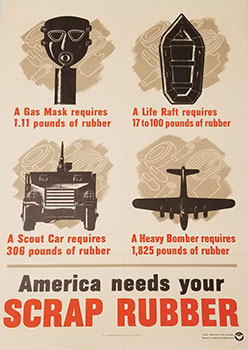 Rubber declined in popularity during World War II when material shortages led to campaigns asking for people to donate rubber to create items needed for war efforts. Those shortages, in turn, inspired the search for synthetic alternatives to rubber, as documented in the Brian Sutton-Smith Library and Archives of Play’s collection of toy trade catalogs. In the post-war years, plastics and rubbers regained popularity for manufacturing dolls and toys.

The Japanese toy company Linemar produced a rubber building brick kit in the 1950s that is reminiscent of LEGO.
Opening the box to examine the building kit’s pieces releases a noticeable odor characteristic of rubber. The bricks are well preserved inside the box, but the cardboard box will suffer from the rubber smell and staining. Hiding inside many games lurk rubber bands around decks of cards or groups of pieces, slowly degrading. When rubber bands are completely dehydrated, they break into brittle pieces or stick to paper. To prevent those problems in museum storage, building kits and games at The Strong have their rubber and plastic contents placed in zip-top bags to isolate degrading rubber materials from their cardboard boxes and paper instructions. 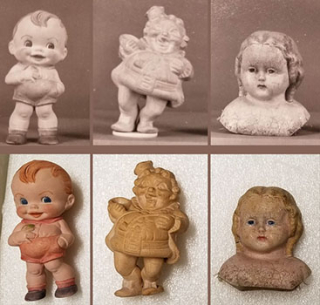 It is difficult to find examples of rubber toys from the 19th century in good condition. Most early rubber toys, dolls, pinball kickers, and other game components have degraded. With age, rubber can liquify, shrink, dehydrate, and crumble. Preserving the examples of natural rubber playthings at The Strong requires dedicated cold storage conditions that slow the chemical degradation process. Since 1990, conservators at The Strong have documented their most successful preventive care measures—providing support for rubber to keep it in its shape as it hardens with age, protecting rubber from excessive heat and light, and avoiding chemical or water-based cleaning that could damage the rubber. The photographs below, taken by The Strong in the 1990s (top row) and in 2020 (bottom row), disclose evidence that the museum’s storage conditions can help preserve challenging materials such as early rubber. Vintage rubber will never bounce back from the gradual deterioration that time inflicts but, as a conservator, I’m grateful for techniques that allow The Strong to preserve historic rubber toys, dolls, and games for as long as possible into the future.