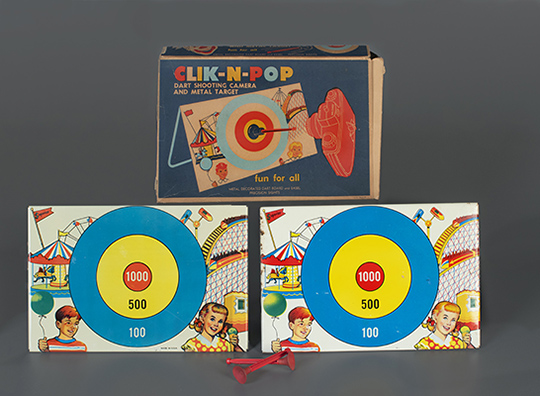 The Strong recently acquired the photographica collection of world-renowned photojournalist Martha Cooper. Kodakgirl, the nickname given to Cooper by New York City B-boys and B-girls, began collecting with a focus on women with cameras and Kodak advertising in the 1970s. Her collection also grew to include photography-related postcards, valentines, snapshots, doll cameras, figures, wind-ups, play cameras, and figurines. To delve into the significance of the collection, it’s helpful to become familiar with the impact of Cooper’s own work.

Following World War II, Ben and Harry Cooper founded Cooper’s Camera Mart in Baltimore, Maryland. When Ben’s daughter, Martha, was three years old, Cooper gave her a Kodak Baby Brownie camera. On weekends, Ben brought Martha along on outings sponsored by the Baltimore Camera Club and would encourage her to take pictures of anything that excited her as they walked the streets. Once Martha mastered a camera model, Ben would give her a more advanced model. 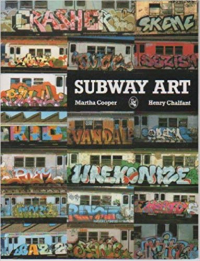 After college, Cooper worked as a photographer for small newspapers and secured an internship with National Geographic. As a staff photographer for the New York Post in the 1970s, spent her evening commutes photographing children playing in her crime-ridden neighborhood. One of these boys, Edwin, introduced her to New York-style graffiti. Edwin suggested that she photograph some graffiti pieces around the neighborhood, and Cooper found herself hooked by the appeal of this new art form. In 1984, Cooper and fellow photographer Henry Chalfant captured the imagination of a generation with their book Subway Art, which documented the burgeoning New York City graffiti movement. 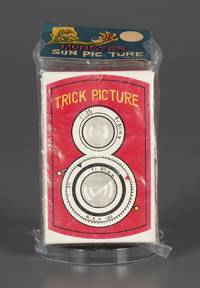 Although the book proved an initial failure, Subway Art became Cooper’s defining work. It inspired artists to pick up a can of spray paint and it helped observers understand graffiti as a global art form. The book, like many of her other publications, placed Cooper in the role of historian and archivist. Cooper has said she is not about the art of photography or perfecting the lighting, but more about “let’s preserve this.” This sentiment is evident in her photographica collection.

When it came time to find a new home for her photographica collection, Cooper said she couldn’t imagine a better place than The Strong museum for its emphasis on play and its location in Rochester, the home of Eastman Kodak. The collection she has placed with The Strong is expansive and includes representations of a wide array of characters—Babar the Elephant, Marge Simpson, Mickey Mouse, the Smurfs, Rugrats, Hello Kitty, Sailor Moon, and Snoopy, among other icons. The Clik-n-Pop game by Superior Toy Co. provides a photo-themed variation of the game of darts. A Tressy doll travels with her metal camera, as well as her airline ticket, picture postcards, and passport. The 1977 SuperStar Barbie Photo Studio playset consists of a vinyl covered box that unfolds into two rooms with graphics that depict a dressing room and a studio with lights and cameras. The Monster Sun Picture Camera is just one variation of a trick picture camera (when the back window of the camera is exposed to sunlight, a picture of a monster appears).

Cooper’s collection offers a unique interpretive window into photography, history, popular culture, and play. We’re looking ahead for an opportunity to share samples from the collection with The Strong’s guests. Meanwhile, in our era of ubiquitous smartphone photographs, it’s important to preserve these playful objects that document a time when cameras were specialized tools for capturing images and memories and when photos were treasured in albums rather than swiped through on an electronic device.