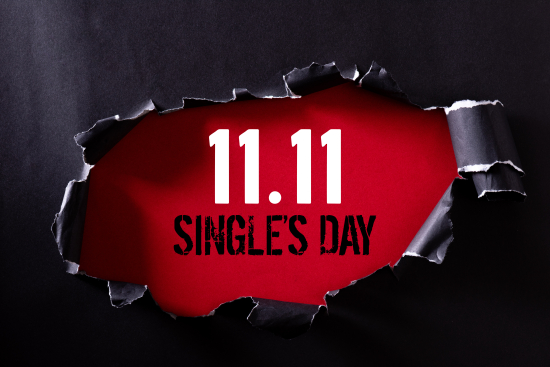 China's Singles Day is the biggest shopping day in the world, and it all began in the 1990s as a response to Valentine's Day. It seems that students at a Chinese university saw the date 11 /11, because of the four ones that appear when one writes the date numerically, as symbolic of being a single person. It took on a life of its own when eCommerce provider, Alibaba, turned it into a national buying spree.

2018 revenue grew to $30.7 billion. Its as if Wal-Mart or Amazon decided to make Washington's Birthday into a major celebration, and it became bigger than Black Friday. It appears, however, that American companies don't quite know what to do with the opportunity. New York Times writer, Tiffany Hsu, says it all in her headline: American Companies Tiptoe Toward China’s Big Shopping Day."

Here is how she puts it:

This year, Taylor Swift will help kick off the proceedings by performing at a gala in Shanghai. Some 22,000 international merchants are expected to offer discounts and other deals, mostly online, without the overnight lines and doorbuster bargains associated with Black Friday in the United States. But American companies have seemed unsure of how to approach China’s $90 billion ad market, believed to be the second-largest in the world.

It's really surprising that western companies, known for their aggressiveness, are so timid once they step outside their own culture. China represents a significant opportunity for growth, yet most companies are either not in the market or only have a toe in the water. If they were, they would be able to take advantage of a whole new shopping day that is all incremental to their current business.

I sense that American toy companies are becoming progressively conscious of the opportunity in China but are putting off or are minimizing their commitment. There may be concerns regarding the current state of U.S. and Chinese relations but business is business and Chinese consumers see the value in western brands due to their consistent quality.

Are you a company that is actively promoting its products in China during Singles Day? If so, let us know about your experience.