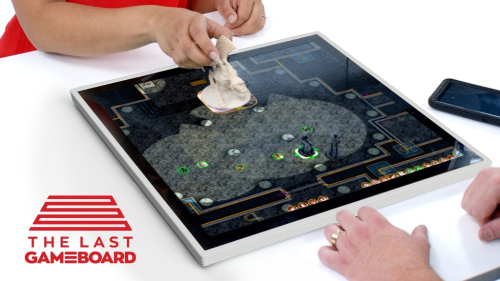 I don't typically write about new products, but my attention was grabbed by "The Last Gameboard," a digital playing surface that replaces traditional, cardboard gameboards — invented by Rob Wyatt, one of the brains behind the original X-Box. It's listed on Kickstarter, where it has exceeded its goal by about half.

The "board" is 16" x 16". What I find cool is that you can sit them next to each other, and they will connect to form even bigger playing surfaces.

It is an example of phygital (physical + digital = phygital) at its best as it deepens and broadens the gaming experience for people who want to sit across the table and engage each other while playing. It is, happily, an example of digital enhancing rather than subtracting from human interaction.

Game developers have been invited to create games for the new platform. I would love to see how Clue, Risk, The Game of Life or Monopoly could be made to be even more engaging.

I see this as an excellent step for gaming, both digital and physical. What do you think?