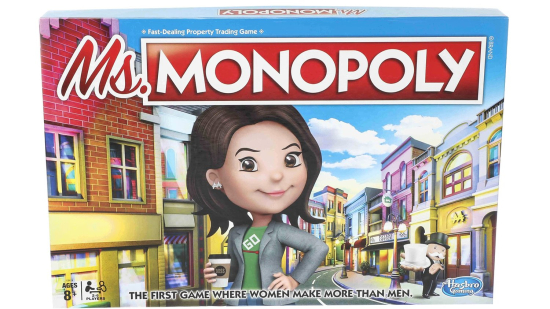 I believe what Hasbro is trying to do is create a vital family conversation about females and how the "game," i.e., real life, is weighted against them.

I once had the opportunity to hear the late literary critic Leslie Fiedler discuss what he believed made for exceptional literature.  A great novel, he said, was one in which the characters have a life outside of the book. He cited Tarzan, the Cowardly Lion, and Scarecrow from the Wizard of Oz, as well as Sherlock Holmes, as characters that are more than a literary device.

I liked then and do now the notion that characters can have cultural and social relevance, even if someone has never read the book from which they spring. This week, I  thought about Mr. Fiedler,  when I learned about Hasbro's newest iteration of Monopoly, Ms. Monopoly. Monopoly has become more than a game. It has become a highly relevant cultural totem.

Ms. Monopoly makes a challenging statement about pay inequities for women. Do a Google search for the words "Ms. Monopoly," and you will find a large number of editorials and articles, some positive and some negative, hashing out the questions that the game raises. Through Ms. Monopoly,  and the earlier released "Monopoly Socialism" and "Monopoly for Millenials," Hasbro is making socially relevant comments on the capitalist system and how it treats those who engage with it, in this case, women.

Ms. Monopoly is a celebration of women. There is a new character, Ms. Monopoly (Mr. Monopoly's niece) and there are women's inventions instead of real estate.

There is more, however, and that is how it employs a rule change that favors female players. The game essentially turns the table on males by giving women an advantage in how much money they receive. Female players are given $1,900 compared to $1,500 for each male when they start the game. Females also receive $240, $40 more than men, each time they pass Go.

The change in rules appears to be designed to sensitize males, young and old, to the gender pay gap. It is, of course, an unfair rule but one that mimics real life. Will little boys and girls understand the meaning of the rule change, or will they see the female's advantage as unfair? We'll have to wait and see.

But I don't think that Hasbro is trying to make little boys feel frustrated or little girls feel entitled.

I believe what Hasbro is trying to do is create a vital family conversation about females and how the "game," i.e., real life, is weighted against them.  At the same time, Hasbro is also creating an outstanding marketing campaign, one that not only makes a statement about the company's values but one that reminds everyone about the Monopoly brand.

One final note: Beyond the gender issue, I think it would be fascinating to learn what happens when players, no matter the gender, randomly receive more money. Do they win more or do savvy players, male or female, come out on top no matter what the handicap.

There is a lot to learn from Ms. Monopoly. Good for Hasbro.