PLAYMOBIL is taking a new direction. It is using what it has learned about children and applying it to adult professionals. The new line is called playmobil pro. I wanted to learn about that and what else is happening at PLAYMOBIL, so I spoke with Frank Müller, PLAYMOBIL'S Head of Business Development. Here is my interview.

Richard:  Can you tell us a bit about the origin of PLAYMOBIL?

Frank:  What many people don’t know is that the geobra Brandstätter Group, who own the brand, had a long history of toy manufacturing even before the first PLAYMOBIL figures were designed.

The success of PLAYMOBIL® began first with a knight, a construction worker and a (by now very controversial) Native American. Horst Brandstätter, the founder, requested his Head of Development Hans Beck to develop a new play system, and the result was the 7.5 cm toy figure which is now one of the most iconic toys on the market, even receiving cult status in Europe. PLAYMOBIL made its first appearance at the International Toy Fair in Nuremberg in 1974, where funnily enough industry buyers were not so enthused by their little smiling faces. They didn’t think PLAYMOBIL had a future. How wrong they were… a Dutch toy wholesaler was the only one to see the brand’s potential and placed a major order.

45 years on, more than 3 billion PLAYMOBIL figures have been produced, delighting children all over the world. Around 40 different play themes are distributed in approximately 100 countries worldwide and more than 6,600 different characters have been created in total.

Richard:  Can you tell us how PLAYMOBIL products differ from other toys in the marketplace?

Frank:  The most iconic feature of PLAYMOBIL are the two eyes and smile. But the great thing about PLAYMOBIL is the huge range of adventures kids can have with the figures. Children can slip into many different roles: will you be a pirate today? A police man? A princess?

PLAYMOBIL is not so much about putting pieces together, but rather about “telling a story”. Role-play is a basic need among children and vital for their personal development. Ultimately, playing with toys is all about experimenting, testing, and imagining real and fantasy situations to prepare oneself for adult life. PLAYMOBIL helps children do just that by fostering imagination and creativity by helping them delve into different worlds. Both parents and educators appreciate the award-winning play system as a high-value, quality toy, which encourages social, motor, cognitive, and emotional skills.

In addition, the unique, distinctive design of the PLAYMOBIL figures and products is noteworthy. PLAYMOBIL is an engineered system, meaning that you can combine any of the more than 30,000 accessories, creating new scenarios and characters each time, even across worlds. The range of almost 40 play themes covers everything from realistic settings such as fire rescue and classrooms, to fictional or historical contexts such as a forest glade with fairies or iconic figures such as Martin Luther. Nevertheless they can all be combined, so a knight from 1974 can even go for a ride in the Porsche Mission E from the 2019 release of PLAYMOBIL: THE MOVIE! (Release date is December in the U.S.)

Safety first: PLAYMOBIL lives up to the strictest quality and safety standards, making it a well-trusted brand among parents. The parts are almost exclusively produced in manufacturing sites in Europe.

Richard:  What are the top PLAYMOBIL sellers?

Frank:  Classic hits like the Pirate Ship, Farm or Knights Castle will never really stop to excite children and are regularly re-released with new features. “Novelmore” is a relatively new franchise, where the famous PLAYMOBIL knights are getting their most spectacular re-release ever this year, marking the beginning of a breath-taking story. Novelmore will also be part of a stunning TV series coming out next year.
In addition, our licensed themes such as Ghostbusters™, DreamWorks Dragons, DreamWorks “Spirit – Riding Free” prove to be very successful. New licenses are planned such as “Heidi” from Studio 100 Media | m4e, ‘Scooby-Doo” (Warner Bros.) and “Back to the Future” Universal), addressing different and older target audiences, as well as children whose parents loved (and still love) these cult shows.
It’s a great time to be a part of the PLAYMOBIL story

Richard:  Playmobil is a toy company, but you have recently innovated into the adult world with PLAYMOBIL pro. Its a product line for adults professionals. 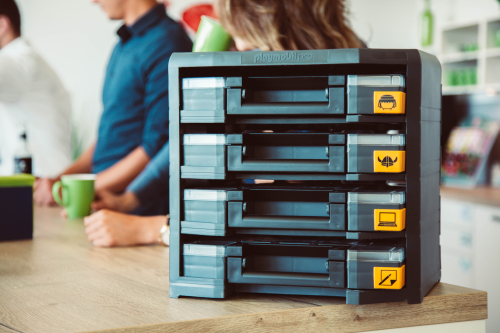 Frank:  Many psychologists and specialists have been using PLAYMOBIL already successfully for years outside the playroom. For example, the "Medical Academy for Psychotherapy of Children and Adolescents" has worked with PLAYMOBIL to specifically design their "Plämokasten" (pronounced Playmokasten) – an application box for use in test diagnostics and as a material for play therapy. The selection of figures and objects is systematically geared to the requirements of therapeutic treatments. The versatile play materials are used for the diagnosis and treatment of children and adolescents – e.g. working with refugee children, children from war zones or abused children – as well as adults.

The PLAYMOBIL team was aware of the growing application of PLAYMOBIL outside traditional scenarios, and started to screen the market more systematically for uses of PLAYMOBIL in business contexts. We found an amazing variety of different approaches already in use, ranging from visualising and developing team processes, communicating science to children, and modelling and developing work culture, all the way to publishing tools like the Toy Comic Toolkit to support the creation of storyboards in business environments.
In parallel, we were receiving a growing number of direct requests for specific kits from coaches, design thinkers, service designers, and other practitioners. As well as looking for professional support, they also seemed tired of “borrowing” Playmobil from their kids…

There seemed to be an opportunity, supported by a wealth of evidence. So we decided to kick-off an incubation project to explore and evaluate where this could go.

Richard:  What other innovations is PLAYMOBIL planning?

Frank:  For PLAYMOBIL, the successful exploitation of new ideas is crucial to a business being able to improve its processes, bring new and improved products and services to market, increase its efficiency and, most importantly, improve its profitability.

Besides new approaches at in core business line, we are identifying new opportunities that add value to our existing customer base- or even targeting new groups. We try to innovate as close as possible with the respective target group and implement their feedback accordingly. For example, the demand for further products and services in the business sector, for example from PLAYMOBIL is one focus for us in the upcoming weeks. Other innovations are top secret, of course 😉

Richard:  We always like to ask this question: Are there any toys on your desk and, if so, what are they?

Frank:  As a big Ghostbusters fan, the PLAYMOBIL Stay Puft Marshmallow Man keeps me company on my desk!