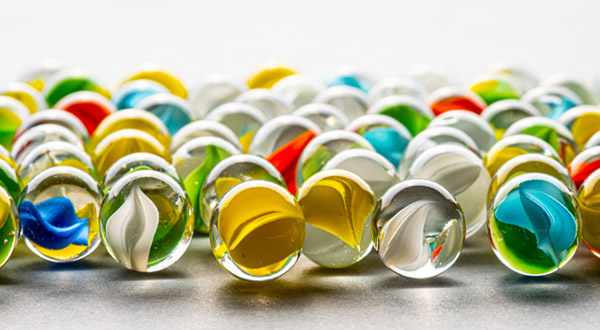 Did you know marble racing was a competitive “sport?” I didn’t either, but I have to admit that I was mesmerized back in January when I chanced upon this video:

I found myself irrationally wanting the marble in the lead, I believe it was a blue marble, to be passed by the other marbles. It eventually was and, bizarrely, I felt elated.

It appears that I was not the only one who found it, well, kind of exciting. That was what I discovered when I read this New York Times article: “Competitive Marble Racing Finds Fans in a World Missing Sports.”

Here is how the writer, Mariel Padilla, puts it in her opening paragraph: “Professional basketball, soccer, and hockey games were suspended. Major League Baseball canceled the start of its season, and the Olympics have been postponed. But at least one sport remains: marble racing.”

There are several Youtube channels showing races: Jelle’s Marble Rally, Fubeca’s Marble Run, and M&H Racing. There’s even a Marbula E One channel. Each, according to the article, has hundreds of thousands of subscribers.

As a child, I was so into marbles that I spent hours practicing and even acquired a case of “Marble Thumb”. I am therefore happy to see marbles being rediscovered as a great childhood and adult pass time.

I hope that our marble companies are taking advantage of this opportunity by tying up with some of these marble racing channels and teams. Who knows, the casinos may start handicapping marble racing in Las Vegas.