This article ran last year. I decided to run it again due to a surge in puzzle purchases due to people being forced to stay home.

Although I had always assumed that puzzles dated back millennia, they are actually, comparably modern, having been first introduced in the 18h century. Interestingly, the first commercially available puzzles depicted maps. Then called “Dissected Map Puzzles” (the term jigsaw puzzle came much later), they were introduced by John Spilsbury in 1766. Mr. Spilsbury was a mapmaker who came up with the idea of passing maps on wooden backgrounds and cutting them up by country. 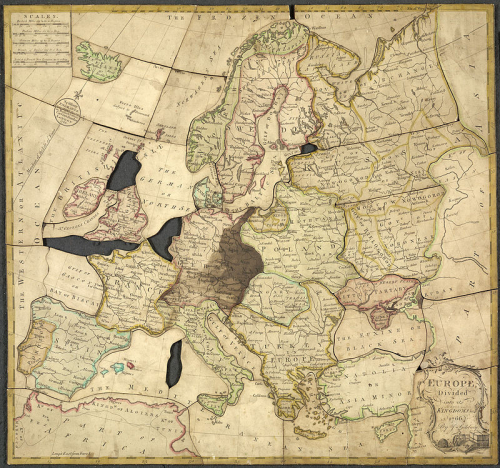 To put that date into context, King George III was on the throne of England, English colonists in America were upset about “taxation without representation” and the American Revolution was only a decade away.

The first wooden maps were extremely expensive, running into the hundreds of dollars in today’s money. The advent of cardboard as a substitute for wood drove the price down and turned puzzling into a popular consumer pass time. 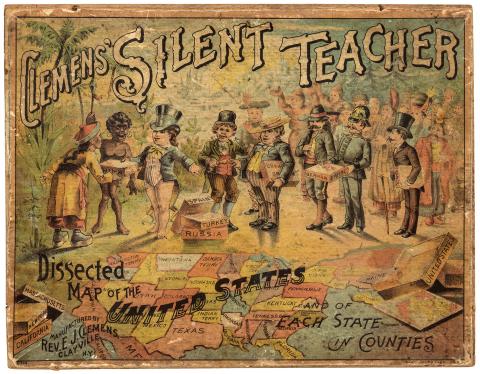 Dissected Map of the United States and of Each State and Counties, Published by Rev. E.J. Clemens 1890

As I did my search, I was struck by the casual racism.  For example, the above puzzle, “Silent Teacher”, depicts all of the racism and stereotypes that went with the times. (Note that the “American” is handing out puzzles depicting other countries so, perhaps, it is an early example of cross-selling.

The New Dissected Map puzzle, seen below, provides us with another glimpse of the racism of the time. Published in 1887 by McLoughlin Brothers, it depicts Lady Liberty teaching an American Indian about the country she has recently taken from him. Notice that she is about twice his size.

With the exception of the Spilsbury puzzle, all puzzles depicted are from the New York Historical Society.