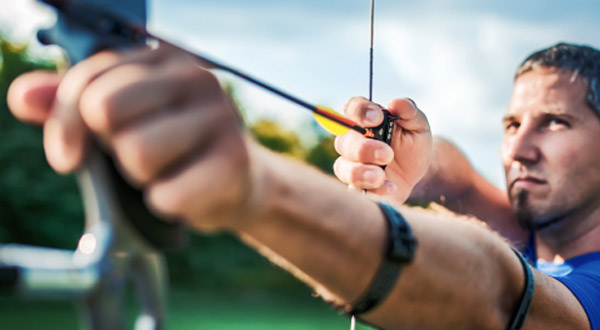 Yes, the game that was terrifying enough with a rubber ball is now, even more, terrifying with a bow and arrow.

In 2013, I wrote an article entitled: “Chessboxing; yep, you read that right.“ As I wrote at the time, Chess Boxing affords you the opportunity of “having your Knight taken at one moment, and your brains knocked out in the next.”

A contest takes place over the course of eleven rounds.  Six of the rounds are dedicated to Chess and five to Boxing.  The rounds alternate with one-minute breaks; the boxing rounds last for three minutes each while the chess rounds are played using a chess clock.   The contest is awarded on a point system unless there is a knock out in the ring or on the Chessboard (i.e.  A checkmate).

I have to say that I admire the combination of brains and brawn but you have to admit it is a strange hybrid.

Now I have chanced upon Archery Dodgeball. Yes, the game that was terrifying enough with a rubber ball is now, even more, terrifying with a bow and arrow. I learned about this new way to play in a Wall Street Journal article by Jen Murphy entitled “Archery Dodgeball Delivers Exactly What It Promises.”

Founded in 2011, Archery Dodgeball is a competitive sport that is now played in 1300 facilities in the U.S. There are leagues, and yes, there are rules. Here is how Ms. Murphy explains them:

Rules differ state to state, but essentially when a referee blows a whistle, teams rush to a central dividing line, grab as many arrows as possible and attempt to hit their opponents while simultaneously dodging incoming fire. Unlike dodgeball, players can shield themselves behind inflatable obstacles. If players are hit, they’re eliminated and move to their team’s sideline. If they catch an arrow, the shooter is out and a sidelined teammate can return.

It was a relief to me to learn that the arrows have no points but rather have a marshmallow type of tip. In other words, when you get hit, it doesn’t kill you. Whew!!!

If any of you play Archery Dodgeball let us know about your experience. In the meantime, DUCK!