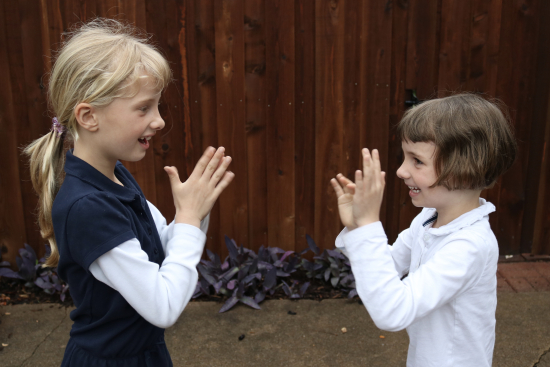 Not because you’re dirty,

Not because you’re clean,

Just ’cause you kissed,

A boy behind the magazine.

Apples on a Stick

Songs and games created by and played by children are an essential part of popular culture. They are a means of communicating old and contemporary themes, some of which are surprisingly mature. They are a global phenomenon that has been going on for……well, no one is sure, but they are definitely global in scope and ancient in practice.

With that in mind, I want to share an intriguing New York Times article and video with you. Written and recorded by Aaron Reiss, Todd Heisler,  and Emily Rhine. "Around the World in 5 Kids' Games," takes a look at children playing clapping games in five ethnically different New York enclaves: Korean, Hispanic, Arabic, Polish, and Haitian Creole.

Hand-clapping games involve a combination of intricate hand movements, rhymes, and competition. What I found interesting was that the games are created and passed down by those who play them, primarily girls.

I was struck by the violence and adult themes present in both the lyrics and competition. For example, losing in one neighborhood can mean a punch n the stomach by the winner and in another a karate chop to the neck. The songs also have child abuse and adultery as themes. Children live in the same world we do, and they are aware of what goes on in their homes and the broader society. It shows up in the rhymes they create and the games they play.

Here are two stanzas, from songs that I find illustrative of the genre:

Went to a Chinese Restaurant

I went to a Chinese restaurant

They asked me what my name was,

Punch in the stomach.

Don’t you stare those eyes at me!

(Clap your hands and say) “You Blinked!”

Apples on a Stick

Apples on a stick,

Not because you’re dirty,

Not because you’re clean,

Just ’cause you kissed,

A boy behind the magazine.

Wanna have some fun?

Her hoop skirt on.

She can wibble. She can wobble.

She can do the splits.

But I betcha ten dollars,

She can’t do this.

And count to ten.

If you miss you start again.

If you have some favorite hand-clapping songs, please share them with us. In the meantime, read the entire New York Times article. It is well worth your time.