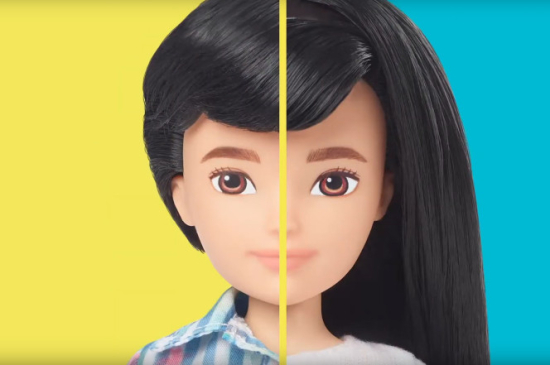 Mattel wants to be at the forefront of societal and cultural change rather than chasing it.

Mattel has released its new product line: "Creative World Dolls."  They are what Mattel calls "gender-inclusive."

The dolls are not transexual or even gender-neutral. Instead, they allow a child to decide whether it is male, female, or maybe even both. Interestingly, like the children who will play with them, they don't boast adult attributes like a bosom or big shoulders.

There is, ironically, an innocence at work here as children are not asked to pretend to be adults. These are not "fashion dolls" for acting out adult social behaviors nor are they baby dolls that are about being an adult and having a baby. They are dolls with children's bodies and they allow a child to play with a toy that reflects back to them where they are in life.

I find Mattel's decision to produce the doll to be a fascinating and brave decision. Fascinating because no company has done this before (at least not that I am aware of) and brave because it is going to be seen by some as political.

Mattel, however, has its eyes on the future and the future is right now. I, therefore, see Mattel's decision to produce a gender-inclusive doll as a long-term marketing decision targeting Gen Z children, their younger siblings (a generation yet unnamed) and Millennial Moms. Children and young parents are not as hung up about issues of gender as previous generations.

The decision to produce the doll is, therefore, not a bid for revenue (this seems very niche) but a pronouncement of values regarding inclusiveness. Mattel was late to the party in moving Barbie from a perfectly shaped blonde to a doll to which Gen Z children and their moms can relate. The new gender-neutral line signals that, under new management, Mattel wants to be at the forefront of societal and cultural change rather than chasing it.

The toy industry's leaders are getting out in front. Just last week, Hasbro announced that it was producing a Ms. Monopoly game which was designed to sensitize children and their parents to pay inequities in the workplace.

The future is right now, and both Mattel and Hasbro want to be there.