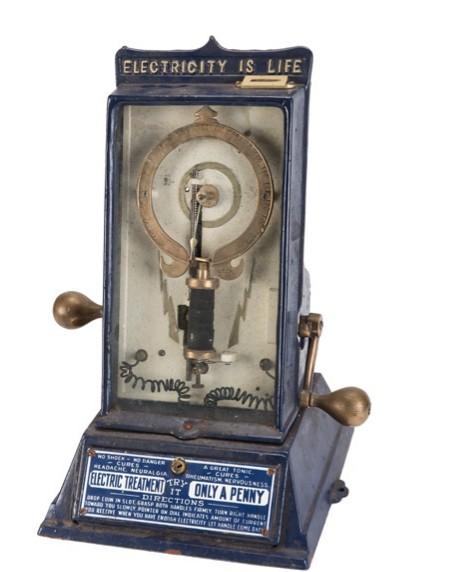 I have always loved the aesthetics of old-time, coin-operated arcade machines. No, not video arcade games but the mechanical ones that began appearing in the early 20th century. I like the use of wood, metal, glass, and electricity that gives them both a look and a feel that is quite different from all things digital. I think it is because the mechanical feels like an extension of the body; digital feels like an expansion of the mind.

At one time or another, there were fifty-seven companies manufacturing hundreds of games and devices. Many of them were pinball machines, but there were many other games that you could, way, way back in the day, play for as little as a penny.

The above machine at the top of this article dates back to 1901 and is, frankly, a bit creepy. It appears that by turning the crank on the right side while holding the knob on the left side, you can run electricity through your body. The label states that it treats neuralgia, rheumatism, headaches, and depression. And all for a penny.