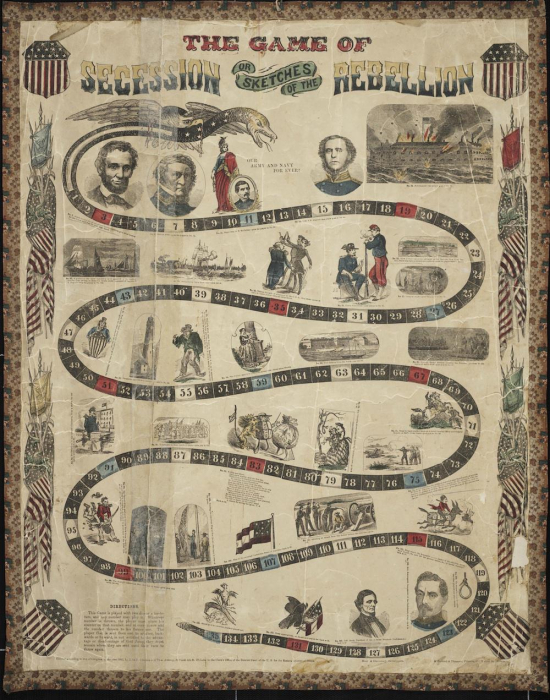 Being someone who loves history and games, I find it fascinating to see how board games can reflect a moment in history. The above image depicts a board game, published in 1862: "The game of secession or sketches of the rebellion: Our army and navy forever!"

According to the Library Company of Philadelphia, it is a Pro-Union game with the player finding good fortune when landing on a Union square and lousy luck when landing on a Confederate space. The game layout is relatively standard for the time. It contains a snake pattern and players move by rolling dice or spinning a top.

If you look closely, you can see a depiction of Confederate President, Jefferson Davis (square 127), and close by, square 119) a noose. A review of the board also reveals the bombardment of Fort Sumter, as well as naval battles, colorfully dressed soldiers and more.

1862, the year the game came out, was not a particularly good year for the Union. As a result, two of the Generals depicted, Union Generals Winfield Scott and George McClellan, were soon to be retired and fired, respectively. Interestingly, neither Generals Sherman nor Grant had yet come into prominence and are therefore not pictured.

1863 would be a different story, and Pennsylvania would experience Gettysburgh. Those Pennsylvanians who played this game of war in their homes would instead find it in their front yards.

Games such as this give us a look inside the family parlor to see how people passed their time during those war years and how they felt about the war that engulfed the country. It is also fascinating to consider that a game inventor, in 1862, put together this game concept and either licensed or sold it to the McFarland & Thomson company. One hundred and fifty years ago, just like today, toy and game inventors were continually developing new ways to play.