I predict that we will see a stronger U.K. presence at American trade shows, and other U.S. toy industry events as U.K. toy companies begin to integrate their toy industry with that of the U.S.

Now that the United Kingdom has officially left the European Union, new attention is being paid to a proposed bilateral trade deal between the U.S. and the U.K. The two countries are, of course, no strangers to each other when it comes to issues of trade, have engaged in trade since the United States was an British colony.

Whatever your opinion is on the subject of Brexit, the United Kingdom will undoubtedly be at a disadvantage now that they have left the European Union. They will be hemmed in by two immense economies whose GDP gives them significant bargaining power. 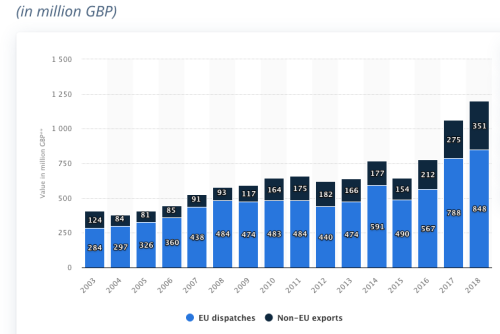 Some of these companies are certainly toy exporters. So, that raises the question, just how big are British toy exports? If you study the Statista bar graph shown above, you will note two things:

Will U.K. toy exporters be able to pick up enough revenue from increased trade with American retailers to make up for the difference in what they will lose with the E.U.? I think the answer is going to be yes. I predict that we will see a stronger U.K. presence at American trade shows, and other U.S. toy industry events and an increase in M&A activity as U.K. toy companies begin to integrate their toy industry with that of the U.S. I think we will see a continuing integration of American and British pop culture, as well, creating new licensing opportunities.

As an American, this is my point of view. If you are from the U.K., let us know what you think.