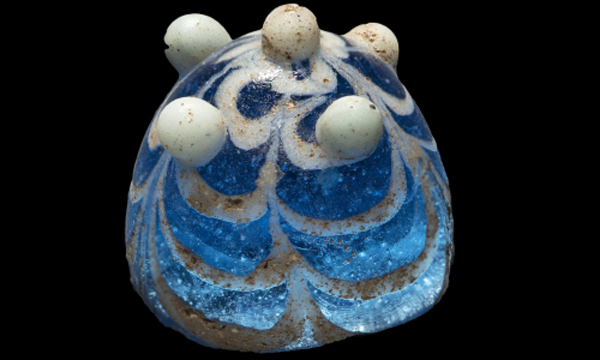 Crowd-funded amateur archaeologists have discovered a game piece dating back to 8th century England. The excavators found it on the Island of Lindisfarne, the site of the first Viking raids on England. Lindisfarne is an island off the Northeast coast of that country.

The Guardian, in an article by Esther Addley entitled "Board-game piece from period of first Viking raid found on Lindisfarne," we learn that:

Archaeologists believe the object, made from swirling blue and white glass with a small “crown” of white glass droplets, is a gaming piece from the Viking board game hnefatafl (“king’s table”), or a local version of the game.

I am not sure how one pronounces "hnefatafl" (it sounds like a sneeze) but I was able to find out how the game was played in an article  by Paul Kelbie, "Shetland revival for pastime of Viking kings."

Here is how Mr. Kelbie describes the gameplay:

Hnefatafl, or King’s Table, is a strategic board game simulating a Viking raid. The king and 12 defenders have to escape 24 attackers arranged in groups of six surrounding the weaker side. The attackers try to capture the king, while the defenders aim to thwart them and guide him safely to one of the corners, known as “king’s squares”.

Once again, we are happily reminded of how long people have been playing games. So, sit down with your friends, figure out together how to pronounce "hnefatafl" and have a great time.