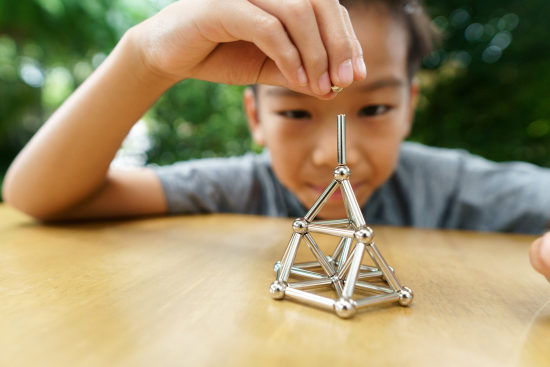 It is ironic, sad and a little confusing that the toy industry, which tried to make safe Super Magnet products, was forbidden from doing so while adult versions were allowed to continue on the market with no safeguards.

Super Magnets come by different brand names, NeoCubes, Zen Magnets, Buckyballs, and more. Whatever you want to call them, Super Magnets are fascinating to adults……..and children.

Super Magnets are ten times as strong as the magnets we played with as children. Some inventors recognized the potential for play and created toys that utilized the more powerful magnets. In 2006, a major recall occurred when a child died from ingesting Super Magnets, which had come loose in a construction toy sold under the name Magnetix.

As a result, the CPSC (Consumer Product Safety Commission) banned Super Magnets from toys in 2009. Ironically, they were not banned in adult desk toys. The result has been a surge in swallowing incidents.  Washington Post writer, Todd C. Frankel, reports on the issue in his article: "Number of children swallowing dangerous magnets surges as industry largely polices itself."

Here is a powerful graph, which Mr. Frankel included in his article. It reports swallowing incidents as reported on poison control hotlines.

Frankel opens with this statement: "The number of children ingesting rare-earth magnets — powerful tiny balls that are a popular desk toy and can shred a child’s intestines — has skyrocketed in the three years since courts blocked the efforts of federal regulators to force changes to the industry, which largely holds the power to regulate itself."

Toy companies are held to rigorous safety standards. Before the Magnetix incident, construction sets (Geomag) using Super Magnets were well-engineered, and there were no reported incidents.

Certain types of products have a fascination for young children. Super Magnets are a prime example. It is ironic, sad and a little confusing that the toy industry, which tried to make safe Super Magnet products, was forbidden from doing so while adult versions were allowed to continue on the market with no safeguards.

Several reputable toy companies went out of business due to the ban on Super Magnets in toys. Was the CPSC too strict with the toy industry? Were they too lenient with Super Magnets for adults? Is banning a product for adults in order to keep children safe the best answer? What is the role of adults in policing play and in choosing which products to bring into a home with small children? What do you think?