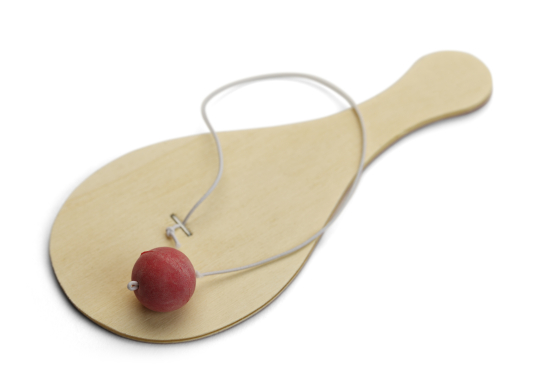 The Fli-Back Paddle, also called the Kick-Back, Bolo Bat and Bounce Back Paddle is a toy that I place under the classification of "Toys I Cannot Do." Have you ever tried to do one of these things? It's nearly impossible to move beyond one repetition. But yet, there are people who can not only hit the ball more than once; they have set records: 32 to be exact.

Just to name a few, there are records for:

But who, you may ask, invented the Fli-Back Paddle? I am glad you asked. It was, in fact, created by William R. Lind in 1921. Mr. Lind's invention was called the Fli-Back Paddle which he produced in High Point, North Carolina. It was once highly popular, appearing in Newsweek and enjoyed by the likes of Marylin Monroe.

If you are anywhere from good to great at paddle ball or whatever you want to call it, let us know. In fact, if you can get past one hit let us know.