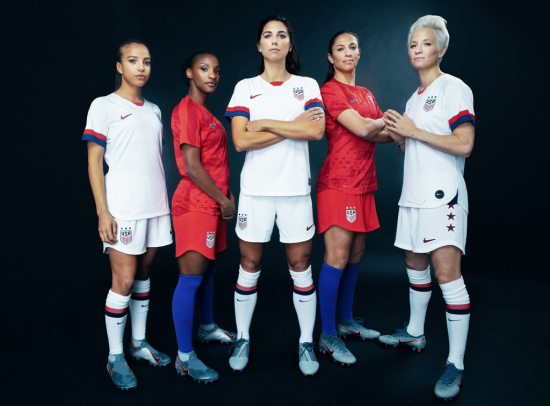 Last week I was quoted in a Washington Post article "It’s 2019. Why are sports-themed toys still so boy-centric?" As a result of that article and a subsequent article by me, "Foosball; Where Are the Girls?" I was contacted by Steve Scebelo,Vice President, Licensing & Business Development at NFL Players Inc. It seems that the NFLPA is the licensing agent for the United States Women's National Team Players Association.

Steve wrote: "We represent the USWNT Players Association for licensing so if anyone does step up and tell you they’re interested in making a foosball table or any other products featuring those fantastic players, please let me know!." I was fascinated by the topic so decided to invite Steve to do an interview to which he kindly agreed. Below is my conversation with Steve (Steve can be reached at steven.scebelo@repeveryplayer.com):

Richard: Can you tell us a bit about the USWNT Players Association and how the NFLPA via REP Worldwide came to be its licensing representatives?

Steve: In 2017, NFL Players Inc., the for-profit licensing and marketing arm of the NFL Players Association, was internally considering an opportunity to extend its business by providing its core services to other groups of athletes and sports-centric properties. At the same time, the US Women’s National Team Players Association (USWNTPA) was concluding its collective bargaining agreement negotiations with US Soccer, one of the outcomes of which was taking their group licensing rights back in-house. The USWNT players fought hard for their rights as they saw how undervalued they had been, and believed they could do more to capture the value of those rights. We noticed and reached out to them to discuss our planned new business and how it might be able to help them maximize their rights. We agreed to move forward with launching the new licensing representation business, REP Worldwide, which features both the USWNTPA and the Women’s National Basketball Players Association (WNBPA) as founding partners with equity stakes in the business.

Richard: According to the statistics I have seen recently, more than 3 milion girls play youth soccer. That's a lot of girls looking for products that reflect their interest in the sport. Why do you think we don't see more toy and sport companies offering these girls products that look like them?

Steve: This is a very interesting question, and one which really does not have a strategic or rational response. Unfortunately, I think this is a matter of companies historically not making sports products for girls and falling into faulty thought processes that are compounded by patterns of bad decision making. Look, even in the apparel market, this year marks the first time that Nike made a jersey that is cut for women, as opposed to just a sized-down men’s jersey. As your statistic shows, the market is there. Seeing the US Women’s National Team players succeed on the world stage year after year (according to a new audit of the US Soccer Federation, in the three years after the US women’s team won the 2015 World Cup, the US women’s games generated more total revenue than the US men’s games) has helped nurture that market and inspire more young girls to play the sport and dream of someday playing for the national team themselves. The data is becoming too strong to continue to be ignored by toy companies.

Richard: This is an exciting time for these players and for women's soccer in general. Ratings are on the rise, not just in the US, but also in Europe and South America. Have you found a similar growth in interest on the part of toy companies who wish to license the rights to the players?

Steve: There is the optimistic side of me that wants to pronounce that the tipping point is here. For example, we licensed CultureFly to create a collector’s box and a collection of vinyl figures featuring US Women’s National Team players. It was fantastic to see a company that has built itself on pop culture and entertainment licenses embracing these players, quickly creating a unique line of licensed products, and gaining a commitment from Walmart to prominently feature the products in more than half of their stores. And yet the flip side can be captured in a Tweet that was sent by Mattel’s American Girls division at the start of the World Cup, in which they created dolls looking like every player on the team, featuring the players’ numbers and all, and touting their support for the players. While the well-wishes are welcome, if the company really wants to show their support for the team, how about creating an actual licensed version of the dolls in that photo that families and girls can buy? It would be a new connection with their customers, and generate a new revenue stream for Mattel plus royalty revenues for the players. A win-win that requires taking a next step beyond passively sending a promotional Tweet that aims to draft off the players’ success without in any way benefitting those players or meeting their customers’ demands. So we are still working hard to bring a full complement of new toy companies around to the opportunity of licensing the rights to these players who are the best in the world at what they do.

Richard: This is, of course, Women's World Cup time and the American's are rolling. How do you plan to keep interest in these players in non-World Cup years?

Steve: One of the most important deal terms in any licenses that we are negotiating on behalf of the USWNTPA is a multi-year term. We are most interested in working with companies that see how strongly these players resonate with their fans at all times, year-in and year-out. There are certainly spikes in World Cup and Olympic years, when new fans are brought into the fold. But the true, passionate fans follow every match these players play. Check their social media followings and you will see not just large audiences of committed fans, but extremely high engagement rates that exceed those of most other athletes. Alex Morgan alone has more than 12 million followers, a number that is growing with each World Cup match. It will be our job to ensure that there is licensed merchandise in the market to meet the demands of these fans at all times. All types of retail channels – mass market, direct-to-consumer, specialty, sporting goods, etc., should be able to find room for these products. These players transcend sport and are pop culture figures in their own right, which makes any retail location a potential showcase for them.

Steve: REP Worldwide represents the group licensing rights of the US Women’s National Team Players Association, which defines a group as four (4) or more players. So when a manufacturer signs a license, they agree to include a minimum of four players in their product line – with no maximum. The players may be featured on product in a group, series or sequence, so, e.g., if a toy company wanted to produce an action figure or doll or plush figure, etc., they would meet the group license requirement by including any four individual players in their line; and we would encourage them to include 6, 12 or the entire roster! Players may also pursue individual endorsement agreements outside of the group license, and some have even begun their own companies. This is a very enterprising and talented group, both on and off the pitch!

Richard: What is the future of Womens and Girls soccer and why should licensees get on board now?

Steve: With the World Cup in full swing, now is the perfect time for new licensees to get on board with the USWNTPA. Next year will bring the Olympics and another opportunity for these players to be featured on the global stage. There is so much positive press coverage for the team and their fight for equitable pay, that any new licensees will also benefit from the goodwill of supporting the cause while sending a positive message to the girls and families who would be the audience for their product lines. The fan base for women’s soccer continues to grow along with youth participation rates. There is a movement under way that will prove the ongoing business case for women’s soccer, and licensees that get on board now will reap the upside of the growing market.

Richard: If someone is interested in a license, how should they go about making contact. Can you give us an email and / or web address they can use?

Steve: I would welcome anyone interested to reach out directly to me: steven.scebelo@repeveryplayer.com. For more on the USWNTPA, please see https://uswntplayers.com/ and for more on REP Worldwide, see http://repeveryplayer.com/.