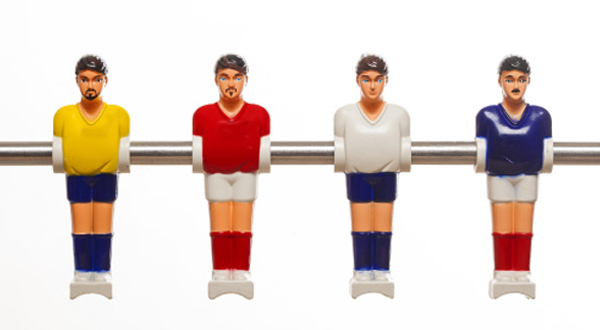 When we deprive one gender of toys and games that look like them and that reflect their self-image, we, at least to some degree, deprive them of a future.

I recently had the privilege of being interviewed by Nicole Graev Lipson for her Washington Post article: "It’s 2019. Why are sports-themed toys still so boy-centric?" Its a well written, thoughtful, and passionate piece on the lack of female representations in sport themed games like foosball, basketball goals, and even Tball.

The article centers around Ms. Lipson's search for a foosball table with female figures. Here is how she describes her search:

I searched Amazon…for models with female players specifically. When none appeared, I tried Target, Walmart, Dick’s Sporting Goods, Wayfair. Eventually, I discovered one table with women players: a full-size model manufactured in 2011 by the Spanish design company RS Barcelona. It sold for $4,365. It no longer appears on the company’s website.

A disturbing understanding sank in: I would not be giving my daughter a female foosball table; they don’t exist.

This situation reminds me of an article I wrote a few years ago about ads for ride-on cars. In exploring a Toys R Us Christmas catalog, I had discovered a number of pictures depicting boys driving girls around in toy cars. There were, however, no images of the reverse. A thorough Google search resulted in my discovering that no ride-on car company, anywhere in the world, depicted girls driving boys. As a result of the article, Toys R Us made sure that the situation was reversed in the following year's catalog.

So, I think that its time we as an industry fixed this issue as well. Why, because it's good for business and its the right thing to do.

Let's start with the business side: Girls make up a sizable portion of children playing youth soccer. This is not a new thing, one of the reasons that the US is a global powerhouse in soccer is due to youth soccer.

With so many female soccer stars in the news and so many girls aspiring to play soccer at a higher level, it would make sense to expand the market for foosball and sports games by offering versions with female shaped players. And while we're at it, why not lock up licensing deals with some of the more famous spccer players like Alex Morgan, Carli Lloyd, or Megan Rapinoe? Either way, there is revenue to be had by a smart company that wants to separate itself from the competition.

The Right Thing to Do

We as an industry supply boys and girls with the tools of play. These tools help shape who and what they become. Many an academic pursuit, a hobby, a passion and/or a profession starts on the playroom floor. When we deprive one gender of toys and games that look like them and that reflect their self-image, we, at least to some degree, deprive them of a future.

Hopefully, soon, we are going to see more sports games bearing female faces and forms. It's smart and it's right.