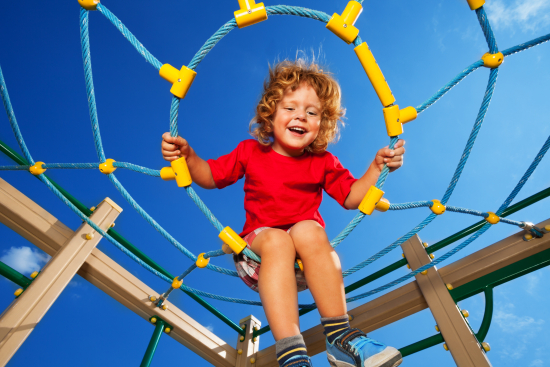 Rebecca Faulkner, Executive Director of Play at "The Yard"

I have long been a proponent of exposing children to controlled risk. It is, ultimately, the only way they will learn to assess what is dangerous and what is not. And what better place to learn that lesson than on a well-constructed playground.

“I came to the counterintuitive conclusion that engaging in risk is actually very important in preventing injuries,” said Dr. Brussoni, who conducted a systematic review of the scientific literature on playground safety in 2015. “Children are learning how their bodies work, how the world works,” she said. “They are learning fundamental skills that ultimately protect them.”

The article is focused around a playground called "The Yard", a 50,000-square-foot play area located on Governors Island, a ferry ride away from lower Manhattan. This playground, however, is very different from what we have grown used to. Rather than the standard play equipment, it instead contains "…mannequins, wooden packing crates, tires, mattresses, an old piano and assorted other detritus of the modern world." In other words, it is more abandoned lot than playground.

But is this kind of playground safe? Apparently, it is? The Executive Director of Play, Rebecca Faulkner, is quoted as saying:

Children are better at figuring out how to have fun than many adults who build playgrounds for them, Ms. Faulkner said. And they can also figure out how to play safely — even in a place that looks more like a junkyard than a playground.

“We’ve had our share of bruises and scrapes,” she said. “But we’ve never had a serious injury.”

The children are not, however, simply thrown to the wolves. Although adults are not allowed in the play area,  there is personnel on premises who watch out for potential danger and intervene to prevent possible injury.

It is a great article and one that I encourage you to read in full because it is full of revelations like these:

“I don’t buy the argument that the screens are keeping the kids from the playgrounds,” said Susan Solomon, an architectural historian and the author of “American Playgrounds.” “If the playgrounds were better, kids would be there. Better playgrounds would definitely give screens a run for their money.”

"…Children seek out rough and tumble play, climbing to heights and moving their bodies at high speed — activities that are a critical way that children learn about risks and cope with fears. When we prevent them from doing these things, they get bored and are tempted to perform rash stunts. This daredevil behavior born of frustration is a main cause of playground accidents."

I loved this article and what I learned about these playgrounds that provide the kind of risky fun that many of us enjoyed and endured during our own childhood years.

I think "The Yard" may well be worth a trip to Governors Island. What do you think?