Several years ago, I was talking with the author Daniel Handler. Handler, who wrote under the pen name Lemoney Snicket, and we were talking about turning his books into movies. “It’s one thing to write, ‘then the house fell off the cliff,’” he said. “It’s another thing altogether to actually make that happen believably in a movie.”

I’ve been thinking of that conversation a lot this week as speculation has swirled around the potential imposition of tariffs on the toy industry and what that might mean for costs and the health of the business altogether. As of this morning, Tariff list 4 includes finished goods for toys, toy jewelry, baby items, strollers and much more. So, now we know. The report says that it's still a "developing situation," and that the "tariff can be implemented any time after June 24,'" So, what will it look like, what will be the impacts, and how will the industry manage? These are not surprising questions when a threatening and dramatic change is at our doorstep.

Nor are tariffs new to the toy industry, or to U.S. business. Prior to the imposition on an income tax in 1913, our government was largely funded by tariffs. Tariffs have been designed to stimulate business, protect trade and try to create global balance in industries since they were first used late in the 18th Century. No lesser figure than Alexander Hamilton pioneered the concept of tariffs as a means of protecting “infant industries,” as the United States, freed from previous restrictions from Great Britain, was finally able to begin its own, homegrown manufacturing. (That part isn’t in the musical.)

The impact of tariffs has been very much part of the toy industry since the U.S. toy manufacturing business started to grow in the late 19th and early 20th centuries. In fact, of the 16 foundational points for the Toy Association in 1916, the very first was about tariffs:

“The problem of tariff is going to be more serious than ever after the war is over.

Every member should appreciate the absolute necessity of co-operation through an organization for watching our interests.”

Part of the thinking behind this effort spearheaded A.C. Gilbert, one of the prime, original organizers of the association, was to ensure that U.S. toy companies would have access to overseas markets. Tariffs, though, had largely been protectionist, starting with the Tariff of 1816 and running all the way through the end of the Second World War, when the concept and practices of the free market began to emerge. After both wars, the recovering U.S. manufacturing sectors depended on tariffs as protectionist as economies around the world struggled to rebuild and put goods on the market wherever they could. There was another strategy that was used effectively after both wars to protect industry and balance global trade: quotas. Seen as an alternative to tariffs that were costly to consumers, quotas were used by German, England and the U.S. after the First World War and again with Japan after the Second World War. Quotas were also effectively negotiated in the 1970s as manufacturing began to move overseas and lower cost competition came from many different companies. 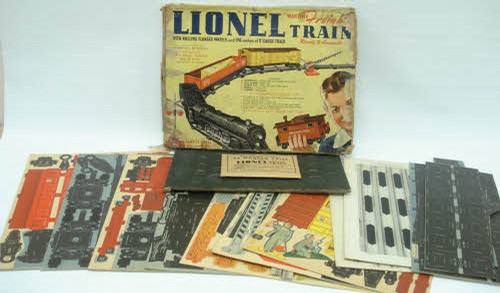 The Lionel Paper Train, produced in 1943 as part of the war effort and when raw materials were scarce.

There’s one side note to this as relates to the toy industry that I’ve always thought was pretty great. During the First World War, domestic manufacturing was limited to essential items. The Toy Association successfully argued to the government that toys were “not non-essential,” so production was able to continue. It may have been hampered by access to raw materials (Lionel made a paper train in 1943 because access to steel was limited.), but even for factories that devoted some production to the war efforts, toy production continued.

It’s important to remember all of this today just to contextualize that wrangling over trade—and particularly international trade—is nothing new to the toy industry. Even reviewing the history of tariff imposition, it’s clear that there have been times in our history where they have been reactionary and retaliatory. They haven’t all been successful, such as the Smoot-Hawley Tariff, and they’ve more often than not been contentious and hard fought by both sides, but what we’re seeing today is not new.

However, it would be naïve to ignore concerns in the current climate as to what will be accomplished with tariffs as high as twenty-five percent. There isn’t really a domestic, U.S. manufacturing structure to protect, and the isolationist bent of the Administration’s talk is difficult if there is no practical infrastructure for major U.S. manufacturing, to say nothing of costs. Nor is it feasible to relocate all manufacturing to countries not being hit with tariffs. Though some of that is happening, there are many larger considerations that make this impractical and costly. Even more so because the climate is so changeable.

As of today, Walmart has announced that they’ll be raising prices because of tariffs. The toy industry hasn’t yet been hit for finished goods—though some component parts have already been tariffed, caught in a larger net targeting other industries—but there is fear that they are coming. The question will be when they become effective and what products will be affected. A delay in imposition gives the Administration a bargaining chip to finalize a deal with China, but it also means that some goods on the water may not be tariffed while later shipments may. Then, there’s the question of who will bear the cost of this? Inevitably, we’ll see higher toy prices, but by how much? And if prices go up, will consumers buy less?

The fact of the matter is that we really don’t know what will happen or its implications. It’s stressful being caught in what Shakespeare called “the whirligig of time.” What we do know, however, is that the toy industry will respond in the best way possible and weather even this… as it always has.