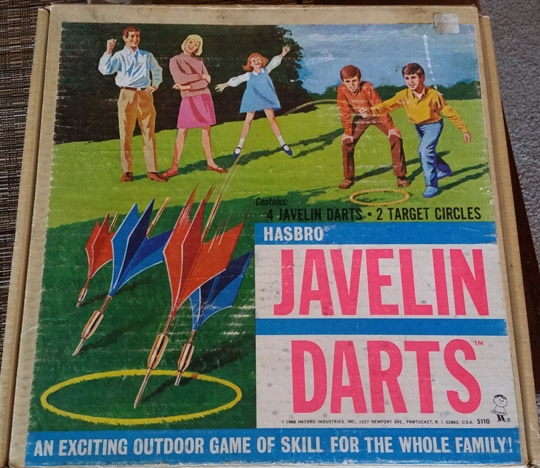 When I take the time to think about how dangerous playing was when I was a child, I have to ask myself: What was the deal with our parents? Were they negligent? Did they not care?

I have been thinking a lot about toy safety and, while doing so, wondering why previous generations of parents seemingly had so little concern for their children's safety, at least compared to today's moms and dads. They let us play with wood burning kits, glass blowing sets, working toy steam engines, molten lead casting sets, bee-bee guns and more than I have space to mention here.

When I take the time to think about how dangerous playing was when I was a child, I have to ask myself: What was the deal with our parents? Were they negligent? Did they not care?

It's a puzzle to me. My mother was a major worrier, in fact, she may have been one of the 20th century's leading worriers. She was scared to death of almost anything, yet I was allowed, at the age of ten, to get into rock battles, own a real bow with real arrows, row around the creek across from our house and to burn, cut, bruise and abraid myself on a pretty much daily basis.

Looking back, I can see that she had little respect for my ability to stay out of trouble but yet she let me do these things. The same was true of the other parents in the neighborhood. So why did they do it?

Here are some thoughts:

Mothers were home during the day. I never felt like any of them were paying much attention to us but perhaps they were. Maybe I, as a child, simply was not aware of that protective eye.

It was a rougher time. Kids were expected to fall down, get knocked down, fall off a moving bike, bruise delicate parts while jumping over a picket fence and in general come up with an assortment of lacerations, bruises, and cuts.

The play environment was more dangerous. No one thought of proactively preventing injuries. In the 1950s and 1960s, there were no seat belts much less seat belt laws. Cars had hard dashboards with heavy, metal protruding knobs. Similarly, playgrounds had cement surfaces supporting heavy wooden swings. Falling off the monkey bars or out of a swing meant knocking out both your brains and your teeth.

They were fatalists. I don't think the world was any less scary. Nuclear war was a constant shadow over our lives and, just like today, parents worried about kidnappings, abductions and worse. After all, the Lindbergh baby kidnapping and the Leopold and Loeb case were still a memory for most of these adults. Yet, they let us run wild. We crossed busy streets, ran down alleys and hid under houses…all unsupervised.

Bottom line was that we ate far less healthy food yet we were in general fairly skinny. We ran across busy streets but most of us made it to the other side. We played with dangerous toys but most of us survived.

So, did our parents hate us? Were they trying to thin the population? Or, did they just accept that the world was a dangerous place and we, like them, would have to figure our own way through?

I don't think they were negligent. I think they just lived in a world where bad stuff happened and there was not much they thought they could do about it. Yes, they were fatalistic and as a result, we got to play with danger.

What do you think? What was your childhood like? Let us know.