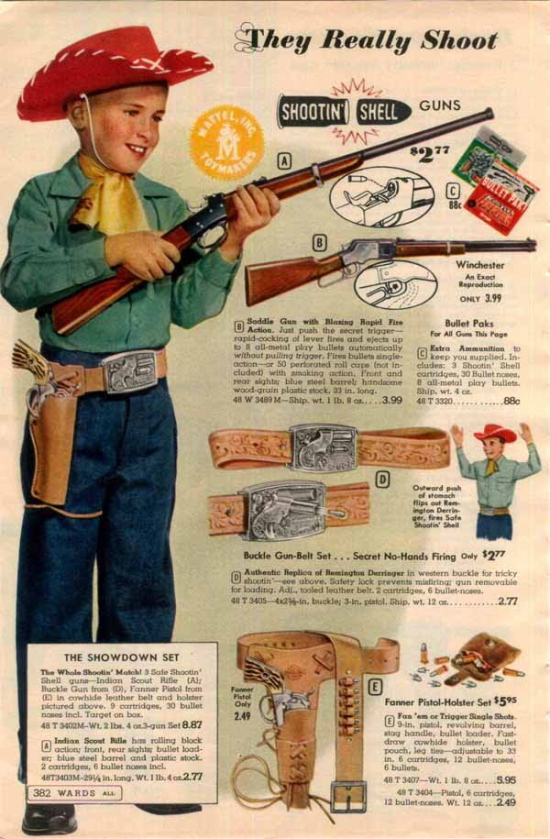 is there some kind of bizarre correlation between not allowing children to play with toy guns and later incidents of adult violence?

I can vividly remember standing in my backyard, wearing a cowboy hat and smiling. My hands were up in the air as one of the Garys on my block (there were two) had just caught me by surprise and yelled: "Hands Up!" I did as he said.  That was because my toy cap gun was still holstered while his gun was pointed right at me.

If you will recall, I said I was smiling. That was because, unknown to him, I was wearing a Yancey Derringer belt buckle which cleverly hid a miniature cap gun. All I had to do was push out my stomach and the little gun would swing out and fire. I did! He was dead! Then he got up and marveled at my gun while I basked, for the moment, in the uniqueness of my toy weapon.

That, as you can imagine, was a long time ago, a time when playing with toy cap guns was a part of everyday play. We played army, guns and cops and robbers; roamed our neighborhoods and shot at each other from behind trees and under back porches. Everyone had at least one real-looking cap gun as well as numerous rolls of caps. It was, to us, an innocent form of fantasy play.  None of us ever equated it with real violence.

That all changed in the 1970s as cap guns began disappearing from store shelves; a reaction to too many body bags coming home from Viet Nam. It was those memories that came to mind as I responded to questions from New York Times reporter, Sandra Garcia (see "Cut the Wire,’ a Toy Bomb Game, Is Discontinued After Criticism"), about the public pushback against a toy called "Cut the Wire" from Yulu Toys. The game challenges the player to defuse some toy sticks of dynamite before they blow up.

I checked out a Youtube critique by The Toy Guy, Chris Byrne (see below). I liked "Cut the Wire", as did Chris. It really challenges a child's fine motor and problem-solving skills. Others did not. In fact, some adults took to the social networks and as a result, Target and Wal-Mart retailers responded by discontinuing the product.

I share the public's squeamishness about a play pattern that models itself on the reality of a very violent world. But does violent play in childhood result in violent actions in adulthood? It was with that question in mind that I thought back to my childhood and the irony that we, as children of the 1960s, did not become violent teenagers and young adults.

Oddly, those High School shootings that have become such a horrible part of everyday life  began occurring in the late 90s, about when those kids who were deprived of cap guns in the 1970s began to come of age. 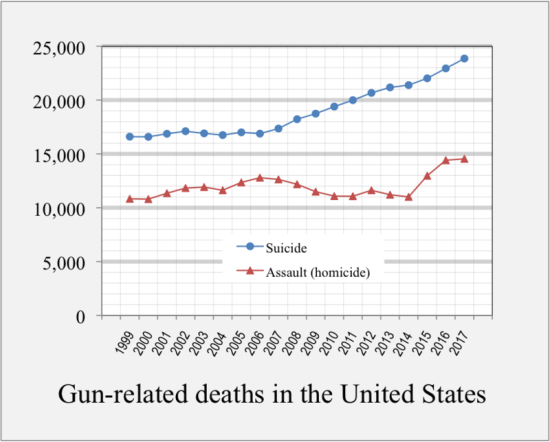 I also thought about my visits to the Hong Kong and Nuremberg toy fairs where a visitor sees an ample number of booths displaying very real looking toy guns that shoot caps as well as various kinds of soft and not so soft projectiles. Some exhibits feature shooting galleries and many are manned by adults, sometimes wearing balaclavas. It some cases it can actually feel be a bit threatening.

Obviously, other countries simply do not have our squeamishness about toy gun play. Yet, in most of the world, gun deaths are a small percentage of what they are in the U.S. (see chart below) 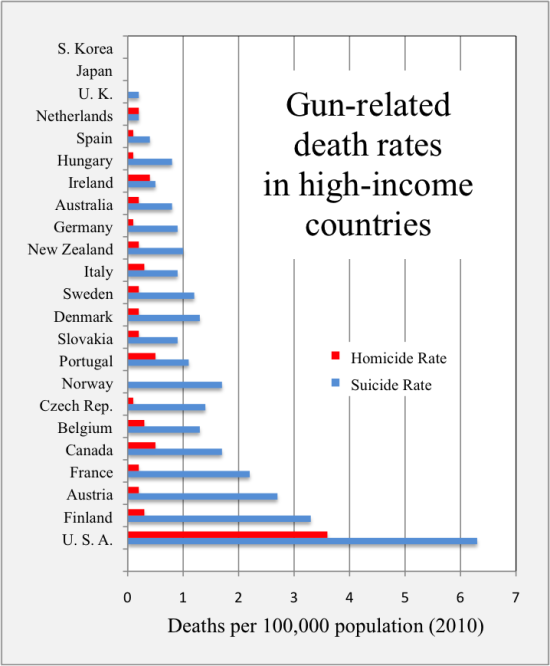 So, is there some kind of bizarre correlation between not allowing children to play with toy guns and later incidents of adult violence? Is it possible that children need to act out violent play in order to avoid doing so as adults? I am not prepared to say there is, there are just too many variables to consider. I am, however,  saying that it is a subject worthy of study.

In the meantime, maybe we should not be so fast in pulling a great toy off the shelf just because it allows a child to pretend to defuse a bomb and, in his or her imagination, save the world.