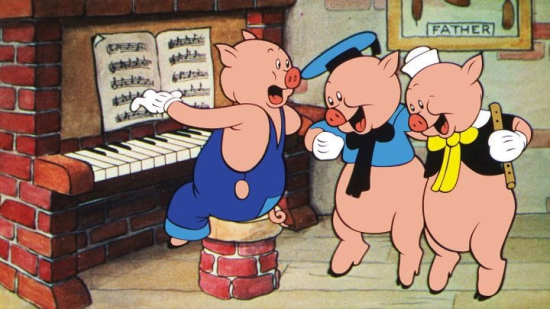 Its the Chinese Year of the Pig so I thought it was time to list the Top 10 Pigs of All Time. I have written similar lists in the past and, in fact, "Top 10 Famous Bears" is still one of our most popular articles. This is my list so I have ranked them in order of importance. Let me know if you agree or disagree with my choices and rankings.

The Three Little Pigs dates back to a 19th century nursery rhyme book by James Halliwell-Phillipps. It has since been retold in a multitude of books and cartoons. Its longevity and ubiquity make it my number one.

E.B. White's classic, "Charlotte's Web" is one of the best selling children's books of all time. Charlotte, a spider, is Wilbur's friend and savior. An example of high culture, it beats out the lovable Porky Pig for the number two spot on my list.

I love Porky Pig and my heart wants to make him number one. Still, his function as the "straight-man" ("straight-pig)" to Bugs Bunny and Daffy Duck make him a lovable also-ran.

Animal Farm, George Orwell's  satirical take on Communism featured two pigs, Snowball and Napoleon. The duo were stand-ins, respectively, for Stalin and Trotsky. It's political satire at its best.

Fearful Piglet is Winnie the Pooh's good friend. A great subordinate character in a classic piece of literature.