At the turn of the 20th century, the toy market in the United States relied heavily on European imports—only 30 percent of the toys sold were produced domestically. Retailers and salesmen depended on buyers who traveled abroad for goods and news of industry trends. In 1902, a group of American toy companies sought to change the status quo, stationing themselves in a lower Manhattan hotel for the month of February to entice toy buyers with American-made products as they departed for Europe and arrived home again. The following year, the informal exhibition was inaugurated as the first American International Toy Fair. The year 1903 also brought the first issue of Playthings magazine, which would remain the toy industry’s primary trade publication for the next century, edited by the visionary Robert McCready. 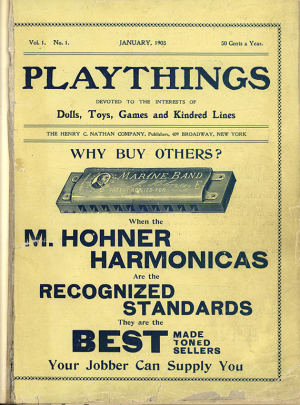 McCready proved his keen insight into the toy industry from the first issue. His stated goal was to “fill a long felt want” for the estimated 20,000 companies and individuals involved in producing, marketing, and selling toys:

“We shall endeavor to place before you each month, as completely and as clearly as possible, the news of the trade. New toys and games will be described, new fashions in dolls set forth. We will have correspondents in England, Germany and France who will tell in those columns of the new things which are brought out in those countries. In this way you will be kept in touch with all that is going on in various parts of the world in connection with the lines to which your energies are devoted.”

McCready filled the slim, 20-page volume with articles on trending toys (ping pong and parlor bowling), new dolls (the Lillian Russell doll and the Flirting Doll), up-and-coming toy men (A. B. Feder, Jr., a buyer for Siegel-Cooper Co. and the first paying subscriber to Playthings), and major industry news (the impending combination of dozens of manufacturers into the National Novelty Company). Calls for information, suggestions, and content were peppered throughout the issue along with teasers for future content. Subscriptions were offered for 50 cents a year to American subscribers so that industry professionals at all levels could have access to the valuable and timely information to be published in Playthings.

By all accounts, Playthings was a success from the start and blossomed as the American toy industry boomed. By April 1903 the number of paid advertisers increased from nine to 22. By June 1912, what had once been a 20-page monthly publication was 198 pages and included two-color advertisements. Toy Fair followed a similar upward trajectory. By 1915 it boasted 70 exhibitors at the Broadway Central Hotel.

Until it ceased publication in 2010, Playthings documented the history of the doll, toy, and game industry from all angles, recording the introduction of virtually every new toy that found its way to store shelves and marking the effects of the Great Depression, two World Wars, the Cold War, the Computer Age, the invention of the Internet, and other significant milestones and trends on the industry. The Brian Sutton-Smith Library and Archives of Play holds the most complete run of Playthings in existence and is dedicated to the care and preservation of this one-of-a-kind resource.

For more on toys, games, and all sorts of other stuff for play—past and present—from Beth and her museum colleagues, visit The Strong's Play Stuff Blog