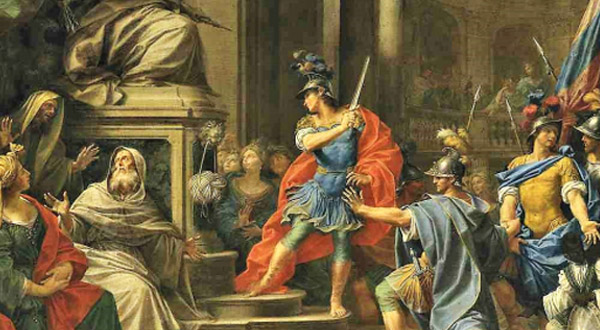 The most important and relatable moment in puzzle history has to be the story of Alexander the Great and the Gordian Knot. The citizens of Gordium (now located in Turkey) claimed that the knot was actually a puzzle designed to secure the chariot of Gordius, King Midas's father. The knot, however, was more than a k not. It came with a prophecy:  Whomever could untie it would become the ruler of all of Asia.

Alexander, a man of action if ever there was one, obviously did not have the patience to figure out how to untie it. He cheated!

Alexander solved the Gordian Knot puzzle by taking his sword and slicing it in half. He then went on to, indeed, conquer Asia, possibly demonstrating that, at least at times, crime (or at least cheating) does indeed pay.

What I most like about the story is how relatable it is to any of us who have been confronted with a puzzle that defies our best efforts. That mounting sense of frustration that comes when an imminent solution hits a dead end.

How many of us, when confronted with a rope, wire or mechanical puzzle, have just wanted to either pick it up and throw it against the wall or simply, like Alexander, chop it in half, if not smash it into a million pieces?

In fact, how about our own little Gordian knots: Those tangled shoestrings, knotted necklaces or knots of hair. Those unwelcome puzzles that stop us in our tracks, preventing us from getting on with our lives, not to conquer Asia but to just  get out the front door.