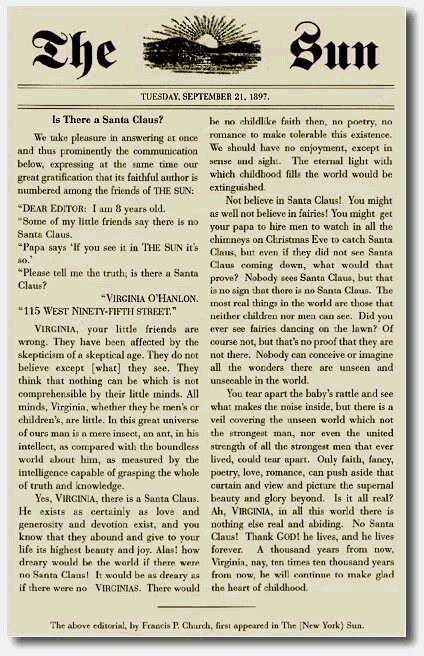 The response by Francis P. Church, in the form of an editorial, was a wonderful statement about the importance of belief. What I discovered thanks to my son Matt, a historian, was that little Virginia went on, in 1930, to receive her PhD from Fordham University. Her dissertation topic: "The Importance of Play."

Her opening statement reads as follows: "While reading the "Principles of Educational Sociology" by Walter Robinson Smith, the writer was deeply impressed by the statement that "Next to the family group and home life, the play group and play life exert the most vital influence upon the unfolding personality of the child."

You may want to stop reading at that point, as Virginia, now going by the name, Laura V. Douglas, goes on to display all of the well-meaning prejudice that comes from that age old blend of condescension and uplift, this time directed at Italian immigrants.

The writer wondered if it was the absence of play life, as American born children of fair social background experience it, that would in some measure explain the dullness of the Italian-American child of Sicilian and Neapolitan origin, who, as the writer knew him, was so lovable, so anxious and eager to please and yet so devoid of that spontaneity and intelligence which make quick learners and apt scholars.

This world is a certainly fascinating place. I find it both ironic and elegant that the little girl who wrote that famous letter went on to become an adult who believed in the uplift that comes from play. All articulated with the hope and unfortunately the prejudice so abundant in the mid-20th century and, unfortunately, still with us today.