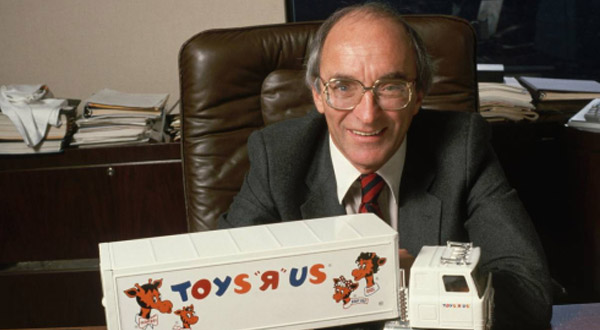 The toy industry has a knack for producing geniuses. Names that easily come to mind are Louis Marx, who was once featured on the cover of Time Magazine, Ruth Handler, the creator of Barbie and Stephen Hassenfeld whose energy and imagination drove Hasbro to new heights. There are more geniuses than I can mention here, but you can decide for yourself who was a genius by visiting the Toy Industry Hall of Fame website.

A name that has to go at or near the top of the list is that of  Charles Lazarus, the creator of Toys "R" Us. At a time when that brand has lost its shine, its good to recall the giants that  Charles Lazarus and Toys "R" Us were.

That is why I suggest that you take out 6 minutes of your time and listen to this wonderful Washington Post podcase by Mike Rosenwald by clicking here.

I learned some new things (Charles was originally a cryptologist) but listening to the podcast mostly reminded me about what foresight he had. We see him as a 25 year old, home from World War II, and setting up a baby goods store beneath his father's bicycle shop. He foresees the baby boom and he envisions a toy store that captures the product variety and mass that are featured in supermarkets. His vision eventually, like all big ideas, becomes outmoded. But in its time, Toys "R" Us is THE place to go for toys.

Listening to it made me wistful for a time when toy retailing was filled by big ideas and giants. That time will come again. For now, take a moment and listen. I think you will enjoy it.