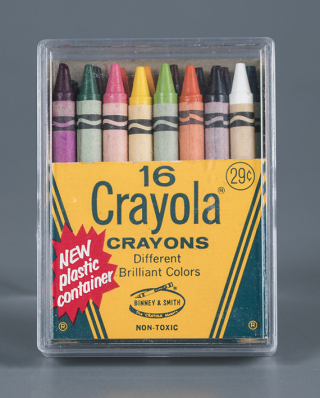 Think of the ubiquitous crayon—generally a three-inch-long, likely worn down (or possibly broken!) waxy object. There could be some in your utility drawer at home right now, or maybe there is a bucketful in your family’s playroom. Head on over to any family restaurant and there’s a good chance you find some waiting at your table ready to be used on the nearest paper placemat. You might even find evidence of crayon usage on your child’s bedroom wall, an ideal mural surface for tiny humans.

Much like the effects of Play-Doh, most adults wax nostalgic over crayons as objects from our youth which enveloped our senses: their colorful hues, the feel of the wrapper gripped between our index finger and thumb, their distinct waxy smell, and of course, the slight “crackling” noise that you hear when lifting a pressed crayon off of a piece of crisp paper. When we reflect on crayons, many of us of think of Crayola crayons—the most famous brand of crayons in American history. However, Crayolas were far from the first crayons made. Evidence of crayon-like drawings can be traced back to 100 A.D. when Egyptians formulated encaustic painting, a process that combined hot beeswax and pigments. The word “crayon” came into usage as early as 1644, originating from the words craie (French for chalk) and creta (the Latin term for earth). Similarly, pastels and conté crayons, graphic media heavily used by artists throughout Europe from the 17th to 19th centuries, pre-date contemporary crayons. Modern day crayons began selling in the 1870s and you could have any color you wanted—as long as it was black. They were used mainly as waterproof markers in factories, but these crayons were made up of toxic substances and not suitable for use by children. By the early 1880s, several manufacturers began to add pigmented colors to wax crayons and eventually produced crayon sets. Some early manufacturers of crayons include E. Steiger & Co., Franklin Mfg., Eberhard Faber, Joseph Dixon Crucible Co., Prang Educational Company, Milton Bradley, Standard Crayon Company, American Crayon Company, Eagle Pencil Company, and New England Crayon Company.

There have been more than 300 crayon manufacturers in the United States, though the brand that still sells the most is Crayola. Initially developed in 1902 by the Binney & Smith Company (now Crayola LLC), Crayola crayons were first marketed and sold to schools in 1903. Taking into account the feedback that they received from schoolteachers, cousins Edwin Binney and C. Harold Smith used waxes, talc, and pigments mixed together in small batches to form a non-toxic product with paper labels, thus making their crayons safe and mess-free. The first pack of Crayola crayons consisted of eight colors (red, orange, yellow, green, blue, violet, black, and brown) and sold for five cents. Alice Binney, Edwin’s wife, was credited with the name “Crayola,” by blending the word craie with the first part of the word oleaginous (oily paraffin wax). 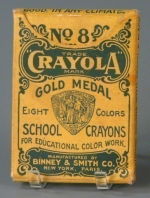 Today Crayola crayons are manufactured using automated machines that mix liquefied paraffin and powdered pigments together which are then poured into molds, hardened, and prepped for packaging. Crayola LLC manufactures more than three billion crayons per year and currently produces more than 120 different colors. As the result of their longevity, popularity, and household name status, Crayola Crayons were inducted into the National Toy Hall of Fame in 1998.

The thought of coloring again with crayons seems very relaxing, I may just have to spring for a new box of crayons and one of those trendy coloring books for adults and let my creativity take over!