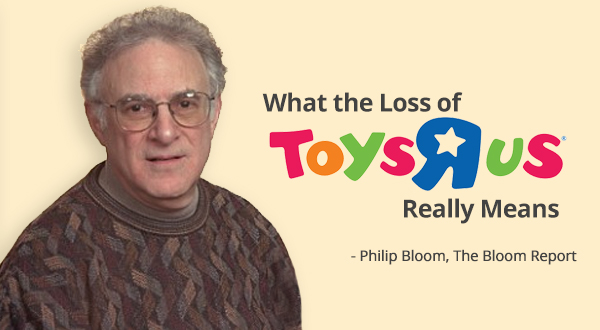 Philip Bloom is a well known, well liked and highly knowledgable commentator on the toy industry. His Bloom Report is a must read for those who want to keep up with news about the business of play.

I recently wrote an article, "Target and Wal-Mart Have Never Known a World Without Toys R Us; that's a problem".  Phil wrote a response to that article which I think is an important read for anyone wanting to better understand what the loss of Toys "R" Us means for the industry.

Philip's thoughts are particularly important because he was with Toys R Us during its hayday. Phil held executive positions with Toys R Us from the 1970's through the 1990's. As Vice-President of Merchandising, he led the company's first international efforts, pioneering merchandising initiatives in the first ten Toys "R" Us International countries (including the entry into Japan). He is a walking history book when it comes to Toys "R" Us.

Our industry should be panicking…and here's why~Richard Gottlieb really called it right in his December 1 piece "Target and Wal-Mart Have Never Known a World Without Toys R Us; that's a problem". I urge you to read it. Here are my thoughts on the subject, along with some Toys R Us background:

First let me address the real secrets of Toys R Us (TRU). These thoughts are from my over 50 years in the retail toy business, including 20 with TRU (including VP of International Merchandising).

The late Charles Lazarus was a genius, and seemingly could see the future. He is arguably the founder of "Big Box Specialty Retailing". His empire was built on just a few simple methodologies. As he began to open large toy stores (40,000 square feet), he gave toy manufacturers the opportunity to grow as they never had before by giving them a place to put their products, and in most cases, their entire lines of merchandise on a year-round basis. Up to that time, toys was seen as basically, a fourth quarter business. Lazarus went to the manufacturing industry and promised them year-round exposure. All they had to do was finance his inventory with long-term "dating". In other words, they could manufacture all year and ship all year by granting TRU payment terms that were stretched out for as long as a year. TRU would maintain inventory on new and continuing items, allowing consumers to buy toys all year. And buy they did!

Manufacturers could now put new items on the shelves early in the year to test their viability and TRU would develop sales projections and place orders with manufacturers for large scheduled deliveries later in the year. For the first time, manufacturers had "real-world" info on which to base manufacturing.

Over the years, TRU developed computer programs to help their buyers to gage demand at their stores and to place orders to satisfy that demand, giving TRU (and other big box toy chains at the time) the ability to maximize sales. TRU was able to do what no other toy retailer could or wanted to do – maximize sales on over 10,000 items during the last 6 weeks prior to Christmas…and beyond!

TRU even forcast carryover quantities on most items…and purchased that carryover inventory for mid to late December delivery, insuring an instock position after Christmas and well into the first quarter of the next year! No one ever did that before!

Which brings me to the point of all this and ties into Richard Gottlieb's article. I constantly see industry sales projections for the year (and beyond) that seem to be totally unrealistic.

Sure Amazon, Walmart, and Target will probably show decent (maybe even large) increases year on year. How could they not. They increased the size of their toy departments and stocked them. But rest assured, they do not want inventory on hand at year-end when they cut back their toy departments. They will not be purchasing any significant inventory to stock their shelves after Christmas.

Each year, our industry has 200-300 items that come under the label of "hot items". Any given retailer could probably sell an unlimited amount of these items if they could get them. But they can't. Most of these items are already gone from retail shelves. In the past, TRU was always the most likely to get some stock on many of these items. And after Christmas shipments of these hot items to TRU would generate sizable volume in the the first quarter.

And after the "hot items" comes 2,000-3,000 items that are good sellers (but not necessarily hot). These are the items I mention above that TRU bought as carryover. Without TRU carryover buying, many millions of dollars of sales are lost to manufacturers, decreasing industry sales. Also affected are "stocking inventory" that was year-round at TRU. That's all gone.

And what about the liquidation of the TRU inventory. It didn't all just get absorbed by consumer buying. Several billion dollars of inventory was put into consumer hands. That will have to come from somewhere Where? Future toy sales.

While I have always taken an optimistic approach to our industry, it's getting harder and harder to see our industry grow in the next few years as we adjust to being a smaller industry. We could be in real trouble, and once again find our industry back in the early 1960's…