Is there someone on your holiday gift-buying list who deserves a memorable toy this season? I’m here to tell you to look no further than the must-have toys of yesteryear to come up with a gift that’s sure to delight—a strategy that will spare you from duking it out in the toy aisle over the latest hot plaything that’s selling at a premium. Just let the toy crazes of the past be your guide to avoiding holiday shopping stress this year. Let’s start by setting your Wayback Machine for December 1960 and sending yourself to the small town of Bryan, Ohio. With a snow flurry sifting down, you’ll find yourself on the street in front of the red brick headquarters and factory of the Ohio Art Company. Only a few months before, the executives of Ohio Art were sweating bullets because they had committed the astronomical sum of $25,000—more than they’d ever spent before—to license the rights to what they considered a promising new toy. The self-contained drawing toy used the principle of static cling (just like an acrylic sweater in your dryer) to adhere gray dust to the back of a clear screen. Turning the two knobs on the front of the toy allowed users to draw an endless line and test their creativity and dexterity. Of course, that toy with its rectangular red frame and two little white knobs at the lower corners was the Etch A Sketch. With the help of a little television advertising, Etch A Sketch was the must-have toy that December and the Ohio Art production line operated a full tilt right into Christmas Eve to keep up with the tsunami of orders that had swamped the company. Even in our digital age, Etch A Sketch remains an enduring classic—challenging to master but reassuring that you can always shake it up and start over. 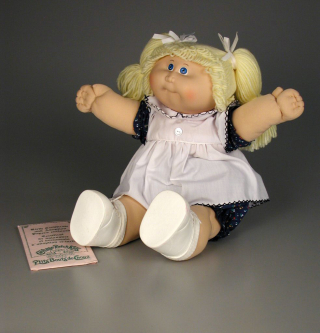 Move ahead a few years to December 1983, when a cute-homely doll was taking the toy world by storm. A few years earlier, a Georgia artist named Xavier Roberts had created a line of fabric sculptures he called Little People. An extra twist was that customers didn’t simply buy Little People, they “adopted” them from what he called Babyland General Hospital. The dolls retailed for what, at the time, was the elevated price of $30 or $40 each (you paid more for a baby with hair), but Roberts and his staff could barely keep up with demand. Eventually, he licensed the concept to Coleco Industries to manufacture the dolls with vinyl heads and cloth bodies. Coleco still kept the adoption certificates and produced the dolls with a range of details such as hair and eye color. Renamed Cabbage Patch Kids when they reached the market in the summer of 1983, the dolls caught the public’s fancy. They didn’t look like a standard baby doll and, suddenly, it seemed like everyone wanted their own. Following a Newsweek magazine cover story on the Cabbage Patch craze, Coleco couldn’t keep up with the demand. As the holiday season progressed, adults became more and more desperate to find dolls for their kids. Retail stores everywhere reported disturbances s frenzied customers battled for the few available dolls. Today, rest assured that Cabbage Patch Kids still have their idiosyncratic look and winsome personality, but you won’t need to put on your gladiator garb to nab one for that lucky child on your list. 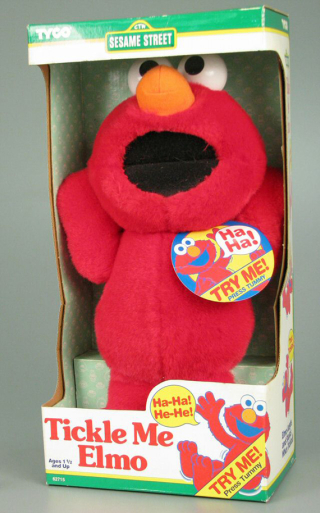 Now think about December 1996. This toy started when inventor Ron Dubren, sat at the park and watched a bunch of kids tickling each other. Dubren joined forces with Greg Hyman, a fellow toy inventor, to create an electronic toy that laughed and squirmed when its tummy was tickled. They first made a stuffed monkey with an electronic chip in its stomach that was designed to make the primate giggle. They pitched Tickles the Monkey to Tyco Toys, which had a license to produce toys based on Looney Tunes characters. Tyco suggested that they turn the concept into a Tasmanian Devil toy called Tickle Me Taz. Time passed, however, and Tyco’s Looney Tunes license lapsed. In the meantime, the company acquired the rights to produce toys using Sesame Street characters. Tyco saw Elmo, the fluffy, red, three-year-old, as a perfect match for the Tickles toy. The character and the technology proved to be a match made in heaven. Tickle Me Elmo became the must-have toy of the 1996 holiday season. As Christmas drew near, retailers knew that they could never meet the consumer demand. To fend-off theft and arguments, Toys “R” Us phoned raincheck holders and left a vague message that the “item” was ready for pick-up. When the customer arrived, the clerk would hand a pre-wrapped package to him, so that he or she could slip out of the store with Elmo, undetected by other shoppers. Tyco inadvertently launched a media promotion when Rosie O’Donnell promoted the toy on her daytime talk show to a massive national audience. The Today show aired a segment about new hot toys and Bryant Gumbel and Katie Couric got an on-air kick out of Tickle Me Elmo. Some entrepreneurs went so far as to run newspaper advertisements offering to part with a Tickle Me Elmo for $1,000 or best offer. Today you’ll find that Tickle Me Elmo retails for much less lofty prices, even though he’s had his electronics advanced. For anyone—young or old—who could use a little more laughter in their life, Tickle Me Elmo might be just the ticket this season.

So there you have it—three holiday toy classics that retain their appeal for kids today and are sure to bring a nostalgic smile to grown-ups too. While there’s nothing wrong with the latest 2018-vintage toys, opting for one of these toys that has stood the test of time can mean that you’ll be relaxing in front of the fire in your comfy slippers when other shoppers are questing online or in person for something that’s trending this year. And what’s not to like about a little less holiday stress this December? Enjoy!