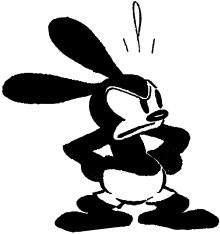 If Oswald the Lucky Rabbit looks peeved, its possibly because he was deserted by Walt Disney. It seems that Oswald predated Mickey Mouse by a year, being introduced in 1927. Walt, however, did not own the rights, Universal did,  and he wanted to be able to license consumer goods bearing the bunny's likeness. He got his chief artist, Ub Iwerks who had created Oswald to design Mickey Mouse.

Universal eventually sold the rights to Oswald the Rabbit to Walter Lantz Productions, the maker of the Woody Woodpecker series among other now forgotten titles. Today, Oswald is back in the Disney fold and, as you can see below, he seems happy about it. 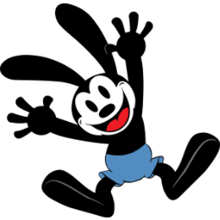 He returned in a video game,  Epic Mickey. Here is how Wikipedia describes this return in the game: "The game's metafiction plot parallels Oswald's real-world history, dealing with the character's feelings of abandonment by Disney, and envy towards Mickey Mouse. He has since appeared in Disney theme parks and comic books, as well as two follow-up games, Epic Mickey 2: The Power of Two and Epic Mickey: Power of Illusion."

He was a pretty cute guy. It would be fun to see Disney make a bigger effort with him.