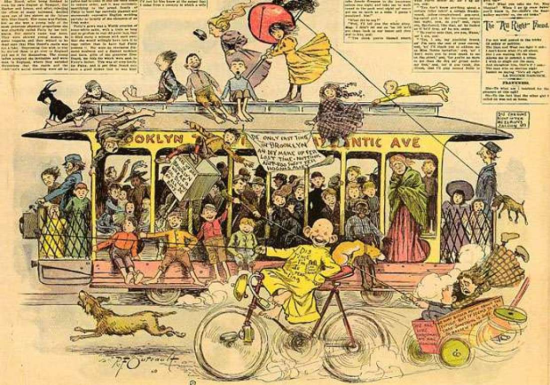 That strange looking character you see on the bicycle in the above picture is the first cartoon character to be turned into merchandise. He is The Yellow Kid and not only was he the first licensed character but is the main character in the first ever newspaper comic strip.

The Yellow Kid was the creation of Richard Outcault . Mr. Outcault would go on to create other, profitable characters but it was The Yellow Kid that got it all started. It was first published in 1895 by Joseph Pulitzer's (the originator of the Pulitzer Prize) New York World. The color yellow was chosen because the process for printing with yellow ink had just been discovered.

The Kid's was given a name, Michael Dugin, and he was presented as an extremely poor child of the streets with a shaved head to prevent lice and a shirt that was a hand-me-down from an older sister. Outcault eventually took his strip to the rival New York Journal. He failed to secure the intellectual property rights before doing and as a result there was more than one version of The Yellow Kid.

Although he is an uncomfortable looking character for those of us with modern sensibilities, I think we can place him in the same line of mischievous, good natured and sometimes neglected children we find in n American literature; characters like Huckleberry Finn, Dennis the Menace and Bart Simpson.