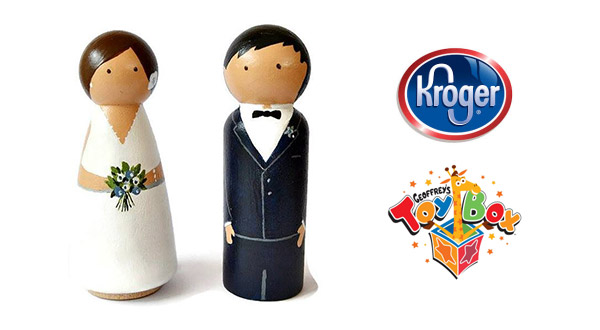 I wish both companies success but it looks to me like a marriage of convenience rather than the future of Geoffrey's Toy Box.

Geoffrey's Toy Box has tip-toed its way into Kroger supermarket stores while no one was looking. It is unclear why there was no press release or advertising about the move. What is known has been derived from consumers reporting on the various social networks; posting images of the displays carrying the Geoffrey logo and displaying Toys R Us private label products like "Journey Girls" and "Eduscience". Consumers report seeing them in both the Kroger and subsidiary Fred Meyer stores. 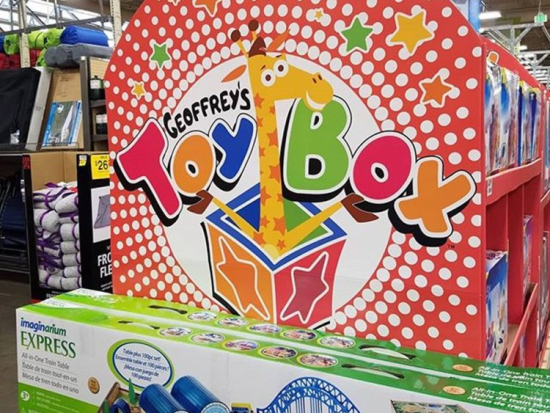 Kroger runs a total of 2,769 stores and due to the bottom up nature of the reporting, it is difficult to know, at this time, just how many stores will be carrying the displays. It is also unclear whether other retailers will be handling the Geoffrey's Toy Box products. While in Dallas there were rumors of Meijer carrying the brand but no mention of Kroger at that time.

I have always favored placing products in supermarkets. It has been reported that the average person is in a supermarket three to five times a week. Consumers more than likely visited retailer Toys R Us on a monthly basis rather than weekly, much less several times per week.

Because of the frequency of visits, supermarkets are great for establishing brand and product equity due to the number of times a consumer sees a given product. Supermarkets also lend themselves to impulse purchases, particularly when there are children riding in the basket.

A supermarket is, however, not a toy store so, though the Toys R Us brand will live on, it will do so in a highly functional, food based environment. You are simply not going to find the magic of wandering the aisles of a toy store when you are primarily looking at frozen corn, yogurt and chicken breasts.

Still, it makes sense for Geoffrey's Toy Box which needs to quickly drive revenue and brand awareness and Kroger which gets a make a make a minor impact going into the 4th quarter.  I do wish both companies success but it looks to me like a marriage of convenience rather than the future of Geoffrey's Toy Box. What do you think?