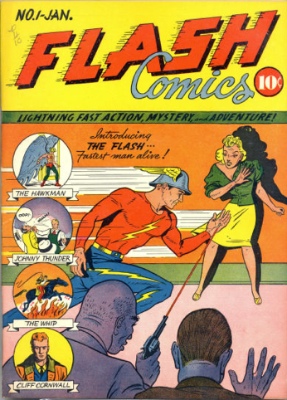 Since their inception in the early 20th century, comic books have been synonymous with American youth and playfulness. The colorful, action-packed stories in the pages of comics translated into creative play in the backyard with capes and masks and into elaborate worlds scaled to the action figures on the playroom rug. As comics and action figures evolved, lines became blurred: which came first, the comic or the toy?

In most cases, the comic precedes the toy: kids get hooked on the adventures of Superman and Wonder Woman, and stores are soon stocked with red capes and gold lassos. The Teenage Mutant Ninja Turtles were created as an inside joke by Kevin Eastman and Peter Laird in 1984. The comics caught on with readers and licensing opportunities appeared quickly. Between 1988 and 1991, Playmates sold $1.1 billion worth of action figures, vehicles, and playsets. The Turtles have been mainstays in American popular culture for the past 30 years. Where the creation of TMNT and the resulting licensing windfall was quite serendipitous, the origin of the Saga of Crystar was more calculated, with drastically different results. Marvel Comics developed the Saga of Crystar in the early 1980s for the sole purpose of finding a toy company to produce licensed toys based on the characters and story. Remco produced a Crystar line for one year, and the comic lasted for 11 issues.

In other cases, the toy comes first and is then licensed to a comic book publisher. In 1984, Hasbro adapted the Japanese toy company Takara's Diaclone and Microman toy lines to create the Transformers. A comic book series, first published by Marvel, and a television series quickly followed. The Transformers have become a global media franchise with toys, comics, movies, and videogames to keep the brand thriving. In 1978, Parker Brothers decided to dip their toes into the electronic game market with a robot toy called ROM (for Read-Only Memory). ROM’s story line was licensed to Marvel Comics, who integrated ROM into the Marvel Universe and enlisted writer Bill Mantlo and artist Sal Buscema to enrich the robot’s story. The ROM comic series outlasted the toy, publishing issues from 1979 through 1986. The ROM toy only lasted a year on the market. ROM has a comeback in the works however: in 2015 IDW Publishing began putting out new issues in the series. In rare instances, there’s a comic, then a toy and another comic, and then another toy and comic a decade later! G.I. Joe made his debut in a comic book series published by Ziff-Davis from 1950–1957. Capitalizing on the popularity of military comics, the G.I. Joe of the 50s and his sidekicks made war “good clean fun.” In 1964, amid the Cold War, Hasbro introduced the 11-½ -inch G.I. Joe “action figure” (to distinguish it from dolls) and created a variety of vehicles, equipment, and play sets to accompany it. DC Comics featured G.I. Joe in two issues of Showcase from 1964–1965 and included ads for Hasbro’s action figure. The polarizing Vietnam War sent G.I. Joe looking for a career change, and he faded from the market in the 1970s. In the 1980s, Joe returned as G.I. Joe: A Real American Hero. This time, a Saturday morning television show and a long-running comic book series published by DC Comics fueled G.I. Joe’s revival.

Some toys and comics are simultaneously created and packaged together. Toy manufacturers include mini-comics with action figures and their accessories to expand on the character’s backstory. In 1982, Mattel produced four minicomics, packaged with the Masters of the Universe action figures, to flesh-out the story of He-Man and his rivalry with Skeletor. DC Comics picked up the licensing for additional series of the comic, and an animated series sustained the Masters of the Universe’s popularity through the early 1990s. Kenner’s M.A.S.K. toy line followed a similar trajectory: the original series of mini-comics describing the world of M.A.S.K. (Mobile Armored Strike Kommand) and its clashes with V.E.N.O.M. (Vicious Evil Network of Mayhem), were packaged with the toys beginning with their debut in 1985. Again, DC Comics secured the license for the comic after the initial series and published the story line through 1987.

In the age of the franchise reboot and cross-over action movie, it is only a matter of time before these toys and comics reemerge. In 2015, news broke that Paramount and Hasbro planned to create a movie universe connecting G.I. Joe, Micronauts, Visionaries: Knights of the Magical Light, M.A.S.K., and ROM. This tantalizing prospect has yet to come to fruition, but this year a M.A.S.K. movie franchise got one step closer to happening. Paramount also announced 2020 release dates for a G.I. Joe movie and a Micronauts movie. The ultimate toy-comic cross-over might be hitting the big screen before we know it!

For more on toys, games, and all sorts of other stuff for play—past and present—from Beth and her museum colleagues, visit The Strong's Play Stuff Blog