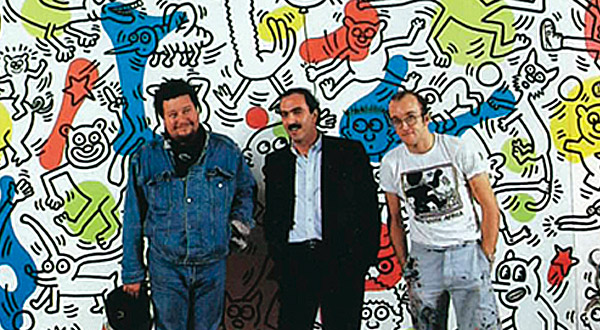 As I travel around the world to various toy industry events I hear a lot of stories. One of the most intriguing I have come across is the journey taken by Jacques Naim, CEO of Oops! , a juvenile products company. So interesting, in fact that I asked him to tell you about it as well. Here is Jacque's odyssey.

It all began with my passion for design toys and my shops Piccadilly Circus and Jackpot in Lebanon and ended sadly with a war that is in many ways not finished yet. After obtaining a Bachelor of Arts in Political Science at the American University of Beirut, I started a business as a gift and toys retailer. When in Lebanon things got really bad and I resolved to leave the country, I went to France in 1985 and I realized they had not yet big toy stores, the main toy business was done then by the mass market chains and mainly at Xmas time. Taking advantage of the contacts I had built in the business, I launched Jouets & Co. in Paris centre , certified as the largest toy shop in France by the Guinness Book of Records in 1987. It was a very special place, designed and decorated by Philippe Starck and featuring a mural by Keith Haring.

Keeping it running was a great challenge, however; in 1990, I sold the company and  I landed a job as the 1st VP of International Marketing and Sales of Shelcore Toys in New Jersey, USA, where I learned a lot from the owner a product genius: Shelly Greenberg.

Artsana, the Italian company which owns the Chicco brand (juvenile and baby feeding products, cosmetics, infant toys, kids cloth and retail shops), noticed my achievements and hired me. In a few months’ time, I became Director of Chicco International Division. I was in charge of all territories -70 markets- apart Chicco’s subsidiaries. However I convinced the owners to start a US subsidiary and I established Chicco USA Inc. that became extremely successful.  After 9 years of very enjoyable and successful time under the guidance of my mentor and I can say friend Piero Catelli (Artsana’s founder and owner), I felt that with the change of generation in the company, it was time to move forward.   I joined Gruppo Preziosi, leading company in the Italian toy business from manufacturing to retail, which had acquired a historic Italian Juvenile brand, ‘Giordani’, aiming at creating a new product line. With the help of a very small team, and the support of the company’s president Enrico Preziosi, in one year, more than150 products were developed and sourced and distributed , making ‘Giordani’ a small brother of Chicco.

After such achievements, in 2006 I felt I had to start again something of my own. I founded Baby Solutions in nearby Switzerland which not only developed nursery articles for established European brands  as Foppapedretti, (furniture and juvenile products manufacturer), and Iana, (more than 400 baby apparel store chain), but also represented brands like Playgro and Tommee Tippee in some countries of Europe, the Middle East and South Africa.

One year later, my encounter with a young Italian designer gave birth to mOmma , a line of 30 ‘design’ innovative baby feeding products ( it was all based on a round feeding bottle design) which proved very successful and we arranged a co-branding agreement with Tomy UK . In 2010, I sold the business to Lansinoh (USA), a division of the Japanese company Pigeon, the worldwide leader in the baby bottles, teats and other baby products.

And now here I am as CEO of Oops, a Swiss design-oriented producer of infant and toddler toys and accessories, whose lines are distributed in more than 40 countries; after concentrating on the use of eco-friendly materials such as wood and fabric, I was approached by Mattel Mexico to develop a Fisher-Price by Oops licensed collection that will be launched in at the 2018 Kind + Jügend baby products fair in Cologne this month. What I have always enjoyed in my work is finding new products, new concepts, new ideas, starting from when I was working for Shelcore and then CHICCO, and when Shelly Greenberg and Piero Catelli would tell me: “As you go around the world you are my eyes and ears; what you do like bring to us and we will develop it”.

Another fascinating aspect of my international connections is meeting with different cultures all over the world, from Japan to Chile, from South Africa to Finland. Throughout all my career I have greatly appreciated the opportunity I was given to meet individuals from all continents and to learn about their lifestyles, needs, problems and expectations. Each culture needs a different approach. I have had the chance to meet some really fantastic people, passionately involved in their job and heedful to the child’s safety, wellbeing and healthy growth. Some became and still are very dear friends.

However, through the years there have been meaningful changes. Competition has become harsher, with established brands suddenly having to face strong newcomers: this is good for the consumers but it makes life hard for the industry. Electronic games, easily accessible even to 2-year-old children through smartphones and tablets, makes it difficult to sell traditional games and toys, that in my opinion are more effective in developing the child’s skills and senses. Traditional retail is being killed by e-commerce and large retailers.  It is a real pity to see the neighborhood shops disappearing; we will miss the local toy store or bookshop, with their know-how and human contact.

The role of distributors and wholesalers is also undermined as they represent an additional cost and suppliers and retailers prefer a direct connection.

Since the market stresses both industry and retail, freedom of choice is reduced, but there is a way out: being creative and different, because if you are like anybody else you have very little chance to survive. I love new challenges and to start writing a new story each time on a white page.