In my last blog post we learned that the first big wave of skateboarding took place from 1959 to 1965, and then skateboarding went mainly “underground” from about 1966 to 1972. However, the skateboarding world began to see a resurgence starting in 1973 thanks to Frank Nasworthy’s 1972 introduction of durable “Cadillac Wheels.” These new and improved composite wheels provided smoother, faster rides for skateboarders and this upgraded feature literally set the “wheels in motion” for the second big wave of skateboarding—1973 to 1981. 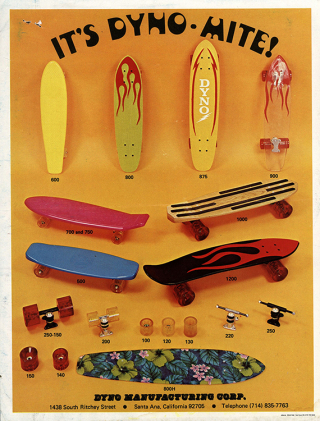 In 1973 additional skateboard design advancements occurred when Ron Bennett created one of the first trucks (axles) manufactured specifically for skateboards, replacing the less functional roller-skate trucks previously used. A truck is a T-shaped apparatus mounted on the underside of a skateboard and these specialized devices greatly affected skateboarders’ maneuverability, especially while turning. With modern wheels and trucks on the market, companies began once again to manufacture and sell skateboards. This uptick in manufacturing and renewed interested in the sport led to the creation of the U.S. Skateboard Association (USSA) by James O’Mahoney in 1974, who eventually created the World Skateboard Association (WSA).

By 1975 Skateboarder magazine (formerly The Quarterly Skateboarder in the 1960s) was resurrected and the movie Spinnin’ Wheels was released. Additionally, in 1975 the first skateboarder safety gear became available and skateboarding contests started popping up all over Southern California. In late April the famous Zephyr team (Z-Boys) blew away the competition at the Bahne/Cadillac National Championships in Del Mar. Their 12-person team, consisting of such skateboarding legends as Tony Alva, Jay Adams, Peggy Oki and Stacy Peralta, brought a new “surfer style” of skating to the forefront and raised the bar on skateboarding competitions. With the rise of professional skaters and growing interest among amateurs, 1976 saw the opening of the first two skateparks. In early March, Skateboard City opened in Port Orange, Florida, and one week later, Carlsbad Skatepark opened in San Diego County, California. By 1982 there were more than 200 skateparks in the United States. In addition, the 1976 California drought became the impetus for the rise in “vert” (vertical) skating, due to the numerous empty swimming pools (“bowls”) that skaters would flock to. 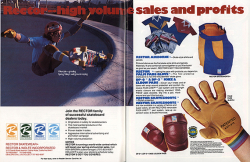 As of 1977 two additional magazines started publishing, Wide World of Skateboarding and Skateboard World. The following year, skateboards increased in size, broadening from seven to eight inches in width to more than nine to 10 inches. Additionally, the popular skateboarding technique, the “Ollie,” (a no-hands air vertical) was invented by Alan Gelfand; and the film, Skateboard: The Movie starring skater Tony Alva, was released. By 1979 and 1980 due to the rise in injuries, especially from skateboarders trying vert skating, skatepark insurance rates skyrocketed. Also during this time, skateparks saw a significant drop in attendance, forcing many to close. In turn, numerous skateboard manufacturers faced substantial financial losses due to the downward spiral of the sport. Skateboarding, once again, essentially went underground, thus ending the second big wave. In 1981 the magazine Thrasher made its debut, aimed at the hardcore underground skaters who were left with only street skateboarding. 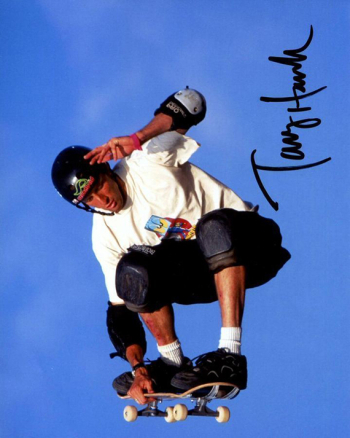 In 1983 the third wave of skateboarding started to take shape as die-hard skateboarders started to take control of the sport and their own destiny. The internationally focused Trans-World Skateboarding magazine started publishing with the intention of portraying a more positive side to skateboarding and appealing to a larger audience. In addition, the National Skateboarding Association (NSA) was formed, and competitions again became the focus for skaters. By 1984 the two most popular styles of skateboarding were vert and freestyle, and numerous famous skaters emerged during this time, most notably Tony Hawk (who dominated vert skating) and Rodney Mullen (freestyle champion). Mullen modified and popularized the skateboarding trick, the kickflip, eventually became one of the most famous street skaters of all-time. Additionally, that same year saw the release of the famous Bones Brigade Video Show with mass appeal to young skaters all over the country and featuring an array of skateboarding superstars such as Tony Hawk, Rodney Mullen, Steve Caballero, Mike McGill, Lance Mountain, and Stacy Peralta.

In August 1986, Vancouver, Canada hosted the TransWorld Skateboard Championships, an amateur and pro competition that marked the first international skateboarding event in the sport’s history. With the newfound mass appeal of the sport, between 1986 and 1989 three popular skateboarding movies hit the mainstream market, Thrashin’ (1986), The Search for Animal Chin (1987), and Gleaming the Cube (1989). But in 1990 saw a world-wide recession that affected all major industries, including skateboard makers. Most skateboard manufacturers closed shop and the sport once again went into decline. Skateboards manufactured in 1991 decreased in size from nine to 10 inches in width back down to seven to eight inches. Street skateboarding resumed its status as the main form of the sport and the smaller boards worked better for urban maneuverability.