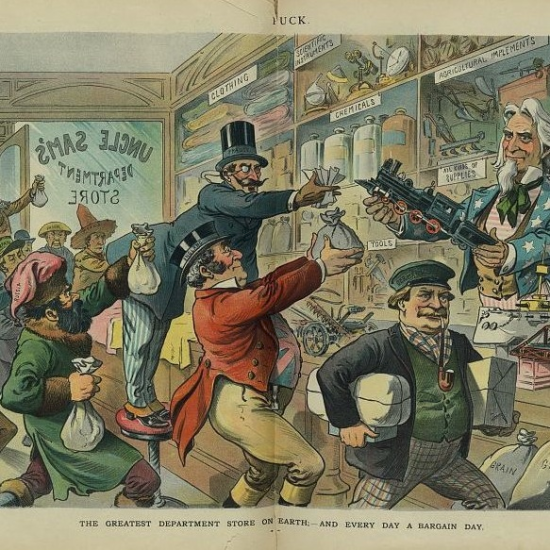 Its's combination of an improved economy and retailers who are finally getting it together.

Retail appears to be looking up; that at least according to a Wall Street Journal  article by Suzanne Kapner and Sarah Nassauer entitled: "Walmart Rides Strong Consumer Spending to Fastest Sales Growth in Over a Decade". It appears that consumer confidence is up and that is turning into increased consumer products purchases, not just at Wal-Mart but at bricks and mortar retail in general.

According to the authors: "Walmart…has drawn more shoppers to its supercenters as it remodels stores and lowers prices. It also reported a 40% jump in U.S. e-commerce sales." Was-Mart e-commerce sales are, at least for now, a small part of its business so the increase there is not anywhere as significant as the surge in its physical stores.

So, what is going on?

Its's combination of an improved economy and retailers who are finally getting it together. Economic prosperity is cyclical but changes in how retailers do business can have a lasting effect. According to the authors, here is how successful retailers are getting it done:

Retailers that have pulled out of the slump have had a sharp focus on their core customers and invested in serving them better by plowing money both into their physical stores and online operations. They have gotten smarter about how they manage their inventory, leaving them with fewer surplus goods and markdowns at the end of a season. And they have secured more exclusive brands that can’t be found elsewhere.

The other good news is that, despite a 2:1 ratio of store closings to new store openings…there are, in deed, openings. Here, according to the piece, are ten chains, which are in an expansion mode:

An analysis of the above reveals these five things:

2.    All of the five, except for Tractor Supply, are deep discounters.

3.    Three of the five, Dollar General, Ross Stores and Five Below are in the low end of the retail price spectrum.

This is all good news for toys and bricks and mortar in general. What we can all hope for, however, is that the higher end chains, Target, Macy's, Kohl's, etc., start opening more stores. The toy industry and the people we serve are best served when we are selling more than the lowest common denominator in product. Let's hope that there is soon room for more higher priced, higher quality products that are a lasting legacy rather than simply an inexpensive piece of plastic that ends up in a landfill.