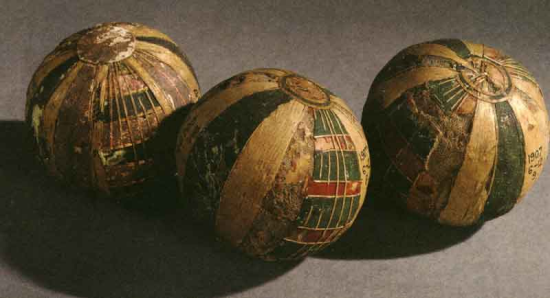 Colorful Balls Made With Cloth Exteriors and Reed Stuffing

Sometimes its important to remember, in this age of digital play that children don't really change. They simply want to play whether it was a couple of thousands of years ago in a Roman courtyard ,or today in a family room. What better way to sense that than to look at the toys Roman children played when Rome ruled much of the known world and Emperors sat on the throne.

The balls, depicted above, are still vibrantly colorful. Can you imagine how bright the colors were in the twenty centuries or so? Visualize children, sweat streaming down their bodies, throwing these back and forth in a game probably not that different than the ones we played as children.

I played marbles as a kid so I have that in common with whomever, adult or child, played with those depicted above, maybe when Nero ruled.

The above dice look exactly as dice do today. Maybe they played some ancient form of Monopoly or just gambled.

If Barbie sends a sample to Ancestry.com and gets her DNA results she may find that this doll is in her family tree; fully articulated, no less.

The girls in the above picture are playing the Roman version of jacks. The bones of a sheeps ankles were used. It does not appear that there was a ball, simply throwing several of them into the air at a time and attempting to catch them.