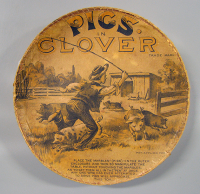 In the 1880s the toymaker Charles Crandall invented a dexterity game a player could hold in one hand. People had likely crafted similar games, often called “ball-in-a-maze” puzzles, for many years. But Crandall’s creation, titled Pigs in Clover, was the first to become popular, sell thousands of units, and cause enough of a stir to be written about and imitated. How did this happen?

Pigs in Clover consists of three concentric cardboard rings fixed to a wood base. The puzzle challenges players to drive pigs (marbles) through clover (the outer rings) and into a “pen” (inner ring) at the center of the playfield without physically touching the marbles. In other words, a player must tilt and carefully shake the device’s playfield to complete the goal. In the 19th century, Americans were familiar with the expression “as happy as a pig in clover,” and solving the puzzle might prove as difficult as driving pigs away from their favorite food. 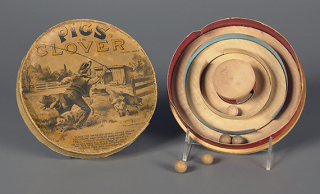 The game proved so popular in the United States, and then in Europe, that demand soon outpaced Crandall’s manufacturing capabilities. And many rival firms brought out similar games, often using the word “pigs” in the title. Granted a patent for his creation in 1889, Crandall soon assigned distribution rights to the large game company Selchow & Righter. In exchange, that firm printed advertising for its popular game Parcheesi on the game’s inside cover. Despite his patent, Crandall and his team could never prosecute the many different firms that manufactured similar pig-herding games. Meanwhile, in March 1889, the Chicago Tribune reported in jest on how Pigs in Clover was causing loss of sleep and productivity—like some critics of today’s mobile phone gamers—as “Dinners grow cold. Young ladies are not dressed for the theaters. Business is paralyzed. Commercial magnates are locked in their private offices. Clerks doze over their desks after sleepless nights…Everybody has at once undertaken to drive those mischievous little pigs from the clover into the pen.”

The similarities to some of the mobile games we play today—in both method of play and in criticisms generated—are remarkable considering the era of Pigs in Clover’s creation. When we play a mobile game today we challenge ourselves to beat our last record, or to rise to a new level of difficulty. Sometimes we “zone out” in our concentration toward a better score. It appears that Pigs in Clover players were accused of doing the same, 130 years ago.

For more on toys, games, and all sorts of other stuff for play—past and present—from Nicolas and his museum colleagues, visit The Strong's Play Stuff Blog.