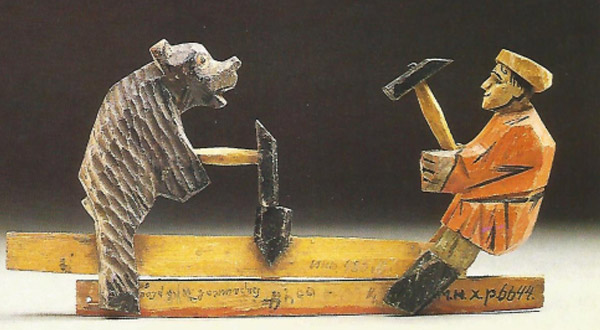 Erastus Corning was nice enough to give us some of his insights on traditional Russian toys. He has a BA and MA in Russian Studies from Yale University.  He spent five years in Moscow as general manager for Pan American World Airways then as head of Corning Tours taking groups to all parts of the Soviet Union and Russia.  Since 2005, he has been the owner of award-winning Bartons Toys in Charleston.

Long winters in Russia with little to do in a largely agricultural economy led naturally to home-based industry that served as an outlet for creative energy and as a means of creating some additional income in the slowest time of the year.  Much of the country is covered with forest, and this natural wealth provided a source of inexpensive material not only for building but for arts and crafts, especially toys.

Two very different kinds of toys have become symbols of Russian craftsmanship.  One style is entirely local in origin: carved wooden toys of action figures that move when a string is pulled or a lever is pushed.  A bear and a man take turns splitting wood or hammering nails, or a circle of chickens peck on seeds one after the other.  These toys are all truly Russian and trace back their roots in the countryside for many centuries.  Examples of these historically interesting toys are still available today in Russian craft and souvenir shops and occasionally may be found abroad as well.

Another kind of Russian wooden toy had an entirely different beginning in Russia and has grown to become a symbol of Russia itself.  This, of course, is the world-famous matryoshka or nesting doll. 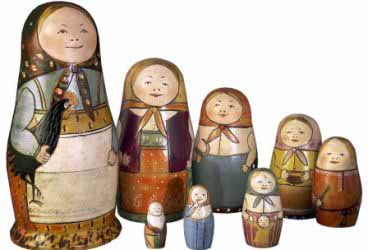 Unlike the carved wooden toys first created in the forests of Russia, the matryoshka as we know it today was the product of professional artists.  It is thought that the earliest nesting dolls were first made in China, and the form spread to Japan.  It was a Japanese nesting doll that was brought to Moscow in the late 1890s and presented to a nobleman who was interested in supporting the rebirth of Russian arts and crafts.  He commissioned an artist who prepared the overall design and painted each of the nesting figures, and a professional woodworker was given the design to follow on his wood-turning lathe.

One of these first matryoshka dolls is still on display in the Toy Museum in Sergiev Posad, not far from Moscow.  The outer figure is of a mother (source of the name "matryoshka"), and her children are revealed as each smaller doll is opened.  The combination of local materials and craft skill with an imported design has resulted in the proliferation of a wooden toy which is immediately recognizable everywhere in the world.

Whether following a foreign model or relying on indigenous craftsmanship, these two types of wooden toys are an important link with Russia's cultural past.