In this age of sharing every idle thought online, younger generations might find it hard to believe that publicly documenting one’s own life wasn’t always the norm. The most ancient forms of memory were kept in the oral tradition, and the keepers of records were individuals entrusted with the task of memorizing details and transmitting them through recitation to others. As writing systems developed and literacy rose across the globe, the written record became the rule (and oftentimes, entire groups of people were left off the pages). During the mid-20th century, however, historians realized the value of preserving stories absent from written history and began to orchestrate and record interviews to capture the stories and memories of people with interesting life experiences and customs. In the Brian Sutton-Smith Library and Archives of Play at The Strong, several archival collections hold fascinating oral history recordings and transcriptions related to play. 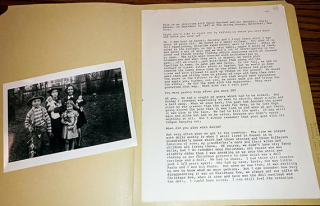 In 1987, Dorothy Washburn, a museum consultant, developed a “public involvement” oral history project. This project utilized the museum’s expansive doll collection as stimuli to prompt memories from women who had played with dolls between 1900 and 1940. With funding from the New York State Council on the Arts, Washburn conducted a four-month series of interviews with 97 area women. Participants were prompted in front of a display containing a selection of dolls from the decade during which they had played with these toys. They identified dolls similar or identical to their own past playthings and described how they played with them. Many participants also brought their own dolls to the museum and were able to share family photographs for the museum’s reference.  This Doll Oral History Project provided useful information for the museum, and the participants became aware of how the ordinary

items which they possessed had much to tell about history.

Two years later, oral historian Mia Boynton embarked upon a project to interview people who had once been close to Margaret Woodbury Strong (1897–1969). She interviewed more than a dozen former employees and family acquaintances to better understand the life story and collecting motivations of Margaret Strong (the founder and namesake of The Strong National Museum of Play). Boynton’s oral history project led to interesting details not readily apparent in the diaries and scrapbooks Margaret left behind: her sense of humor (cheeky), the personal arrangement of her collections (meticulous), her favorite television program (Family Feud). Boynton recorded audio and provided transcriptions of memories about a woman who had passed away 20 years earlier. Even now, as we approach the 50th anniversary of the provisional charter for the Margaret Woodbury Strong Museum, we are still learning details about Margaret thanks to Boynton’s project, housed within the archives’ Margaret Woodbury Strong collection. That brings us up to the present. Laine Nooney, video game historian and scholar, has delved into the origins of celebrated company Sierra On-Line (where Roberta Williams, a pioneer in the video game industry, wrote and designed adventure games). During her research in the 2010s, Nooney conducted oral histories with former employees of Sierra On-Line, discovering insights about how the company operated and learning even more about the video game industry in the 1980s and 1990s. Nooney recently discussed some of her research in an American Journal of Play article, and she plans to publish a book about Sierra On-Line in the near future. (The oral histories will later be available for research use in the Laine Nooney Sierra On-Line collection in the archives.) Also related to recording video game history: The Women in Games Initiative at The Strong seeks to document and celebrate the crucial contributions of women to the electronic games industry. As part of this ongoing initiative, The Strong is collecting both museum objects (such as games, prototypes, and industry ephemera) and archival materials that illustrate the impact of women on the video game industry—including oral histories and questionnaires containing recollections and background information about these contributions.   Moving forward, it is important to remember that many people have not had the opportunity to tell their stories to the world. By documenting memories and narratives, the past can come alive for future generations.

For more on toys, games, and all sorts of other stuff for play—past and present—from Julia and her museum colleagues, visit The Strong's Play Stuff Blog