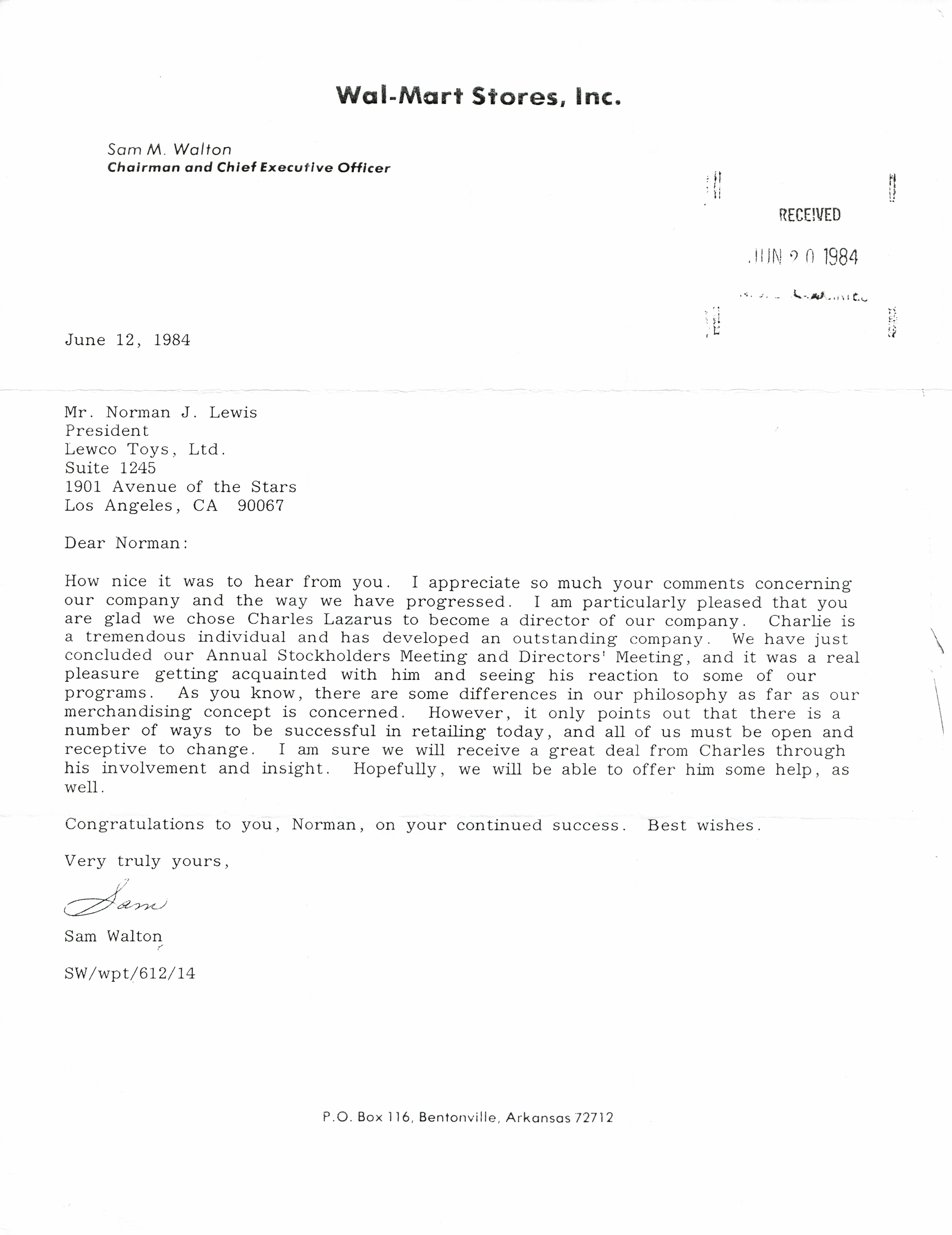 Ken Lewis, CEO of 4Kidz, Inc. sent me an historical artifact this week, a 1984 letter his father, Norman Lewis, received from Sam Walton, CEO of War-Mart. It offers us a rare peek at Mr. Walton at a time when he was still growing his business from a regional retailer to a global powerhouse.

The Wal-Mart of 1984 was, of course, a much smaller version of the retailer we know today. The chain had 682 stores located in sixteen states. Today there are thousands of stores in numerous countries. At that time, the company employed 62,000 people. That's a lot of folks but no where near the two plus million Wal-Mart employs now.
Norman Lewis was then the President of Lewco Toys, situated in Los Angeles (on the Avenue of the Stars, no less). Norman had written Sam to compliment him on naming, Charles Lazarus, to the Board of Directors of Wal-Mart. You can't say much more than "Wow" when you see that.  It is hard to believe today that Charles Lazurus, founder and CEO of Toys R Us at the time, was once an integral part of the Wal-Mart team that was to eventually play a role in putting his own company, Toys R Us, out of business.  The fact that Lazarus was on the board shows that, at least in 1984, Toys R Us and Wal-Mart did not see each other as a serious competitors.
What I find particularly interesting and why I am sharing this letter with you is that it provides us with a chance to see a side of Sam Walton that has been clouded by history. Consider this statement that Walton makes about being open to new ideas: "As you know, there are some differences in our philosophy as far as our merchandising concept is concerned. However, it only points out that there is a number of ways to be successful in retailing today, and all of us must be open and receptive to change."
This is a Sam Walton who is still learning and a far cry from the confident and bold take no prisoners retailer he was to become. This is a Sam Walton who is hungry for, and open to, new ideas and not yet the bigger than life legend he was to become.
Thank you Ken for sharing this great letter with us. Sam Walton was right, "There is a number of ways to be successful in retailing today." And that particularly applies right now, 34 years later.