In the context of toy and sports history, skateboards and skateboarding have had a relatively short existence. Skateboarding might be the phoenix of the sports world: rising, dying out, and rising again. The sport has endured a fair share of highs and lows over the last 60-plus years. 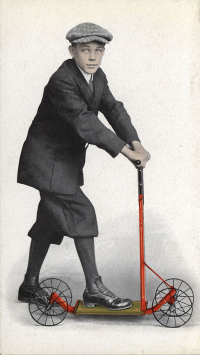 However, before skateboards there were scooters, sometimes known as kick scooters and push scooters. Varied forms of scooters have been traced back to the early 1900s, most of them made from wood, metal, or a combination of the two. Scooters had anywhere from two to four wheels. Some of the wheels were metal and others were similar to the wheels on pedal cars. In the 1940s and 1950s, crate scooters made popular sidewalk vehicles. Most crate scooters were handmade. They were relatively inexpensive and simple for kids to construct by using a milk crate or wooden fruit box and metal roller skate wheels attached to a wooden 2 x 4. Eventually kids started removing the boxes and handlebars and just started riding the board with wheels, reminiscent of the famous skateboard scene in the 1985 film Back to the Future. By 1959, the first mass produced skateboards emerged from the factory of Roller Derby Skateboards in La Miranda, California, and were sold in roller derby rinks throughout the United States and eventually through mail-order companies such as Sears.

By the early 1960s, skateboarding started luring participants from the surfer scene. In 1962 a southern California surf shop, Val Surf, began making its own brand of skateboards and struck a deal with Chicago Roller Skate Company for the wheels. The skateboards began to attract everyday surfers who could use the boards when they weren’t in the water, and thus the term “sidewalk surfer” was coined. Additionally, skateboarding gained popularity when Larry Stevenson, publisher of Surf Guide, promoted it in his monthly magazine. In 1963, Stevenson made the first professional skateboards using the Makaha brand and organized the first known skateboarding contest. That same year saw an evolution in skateboard design with the use of clay (also known as composite) wheels that replaced treacherous metal ones. Moving ahead, in 1964 surf and sailing entrepreneur Hobart “Hobie” Alter joined forces with Vita-Pakt company to make a line of Hobie skateboards; the Hobie line also sponsored several contests and professional skaters. Later that summer, the musical group Jan and Dean performed “Sidewalk Surfin” on Dick Clark’s American Bandstand, an event which helped further popularize skateboarding with mainstream society. In 1965, the skateboarding sport peaked as manufacturers tried to keep up with the demand, cranking out an estimated 50 million skateboards between 1963 and 1965. In May, the world’s first skatepark Surf City in Tucson, Arizona opened to the public. Additional milestones that year include: the first skateboarding magazine, The Quarterly Skateboarder; the first nationally televised skateboard championships on ABC’s Wide World of Sports; female skateboarder Patti McGee featured on the cover of Life magazine; and the first film about skateboarding, Skaterdater, received an Academy Award nomination for best short film. However, by the end of 1965, the high number of skateboard injuries seen in hospital emergency rooms nationwide led to many cities banning skateboarding. Some city officials went further, urging stores not to sell them and parents not to buy them. Skateboarding developed a reputation as a public health hazard. Sales declined and several manufacturers were left with substantial inventories of skateboards that couldn’t be sold.

But skateboarding wasn’t totally obsolete, and some amateurs and professionals remained dedicated to the sport. In 1966, Vans shoes made their way into the surfing and skateboarding scene and by the early 1970s Vans shoes were “the skateboarding shoe” to wear. Makaha’s founder, Larry Stevenson, continued to perfect skateboard design by adding his patented “kicktail” to the end of the deck. In 1972 another design modification radically enhanced skateboarding performance: the urethane wheel. These wheels, formerly used in indoor roller skating, were introduced to the skateboarding world by Frank Nasworthy who realized that their durability (they were made from industrial forklift tire compound) would enable skateboarders to turn without sliding. The upgraded wheels, aptly named “Cadillac Wheels,” ultimately revolutionized the skateboarding industry.

By the end of 1972, the world had seen the first big wave of skateboarding from 1959 to 1965. A new era began in 1972 and has continued to the present. Want to know how the story turns out and why the skateboard earned a place in The Strong’s National Toy Hall of Fame? Stay tuned for Part II of this blog where I’ll cover the period from 1973 to 1991, the second and third big skateboarding waves in history.