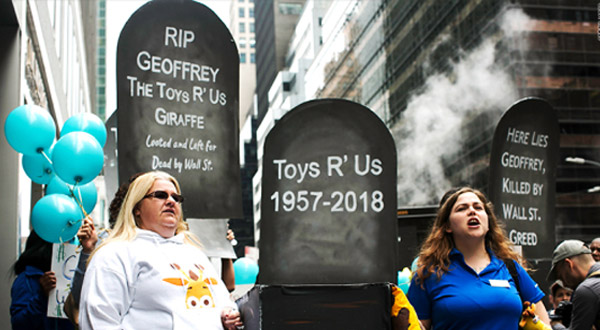 Image from Center for Popular Democracy

On May 14, 2018 I wrote an article, "The Toys R Us Bankruptcy; it just gets worse", about the struggle by Toys R Us employees to receive the severance pay they deserve. At the time I wrote:

What really makes me mad is the fact that those top executives are receiving that $8.2 million while 30,000 loyal, hard working employees, many of them minimum wage workers, receive nothing. Some of these workers have been with the company for decades. It is truly shameful.

In order to make their case they ran an on-line petition, "Toys "R" Us: Employees Deserve Severance Pay", which accrued 53,882 signatures.  Last weekend they hit the streets of New York City  to make their voices heard. Protesters showed up outside of former Toys R Us CEO David Brandon's apartment building as well as in front of the KKR, Bain Capital and Vornado offices in Manhattan. They held signs, engaged in chants and made what will almost certainly be an unsuccessful attempt to get the three Toys R Us owners to shed on them some of the same love they gave to Mr. Brandon and his senior executives.

If you think I am exaggerating, take some time this weekend to watch two classic Frank Capra movies from the 1930's:  "Mr. Smith Goes to Washington" and particularly "You Can't Take It With You". See if the sentiment doesn't seem familiar.