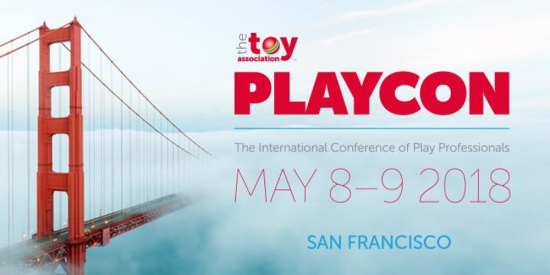 My compliments to the Toy Association and the PlayCon committee for putting on a PlayCon 2018 that can only be described as a truly excellent event. I say that for a number of reasons:

The venue was good

The venue, SFJazz in San Francisco, was a departure from our past event spaces. Rather than sitting at tables, attendees were provided with theatre seating in steep, vertical tiers. As a result, everyone was able to see the speakers without any obstructions.

The speakers were polished and entertaining.

Denise Chapman Weston, owner of 120 patents knocked us all out of the toy box with her humor and creativity while Michael Giacchino, an Oscar®, Golden Globe®, and GRAMMY® Award-winning composer, gave us insights on the power of music in moving a movie's plot forward while moving that same audience to tears or laughter.

The content, both qualitative and quantitative,  was copious and of the highest quality. The sheer amount of data and knowledge from Nickelodeon's Sujata Luther, Euromonitor's Matt Hudak, NPD's Frédérique Tutt, Trend Hunter's Courtney Scharf, Disney Channel's Jennfer Rogers Doyle or any of the other 19 speakers, was, at times, almost overwhelming.

The attendees were a pleasure

I led a two-hour open forum on the first day which elicited a great deal of insights from the audience on their view of a post-Toys R Us world. Most were optimistic, which was, by the way, supported by the research provided by almost all of the speakers. It was a unique moment for the industry, a moment when we freely shared our hopes, fears, ideas, and visions of the future.

Not every event is perfect

Not every event is perfect, however, and this one was missing one major element — You. Yes, we had a nice turnout (approximately 150 people) but it was nowhere the number that should have been in attendance. It is surprising that an event of this nature taking place at a point in our industry's history like this one did not draw a much bigger crowd.

The open forum that was held just prior to the beginning of PlayCon was a great opportunity for all of the industry's constituencies to speak directly to each other, share ideas and express needs.

Bottom line, PlayCon is most fully enriched when the audience is big, diverse and committed to learning and participating. The Toy Association will be providing information on the next PlayCon in the near future. Wherever it is, I'll be there. I hope you will be there too.